There is no denying that the Whaley House Museum is right up there with the spook factor.

This house has even managed to turn 100% solid skeptics into quivering wrecks, who are now 100% solid believers in all things supernatural. 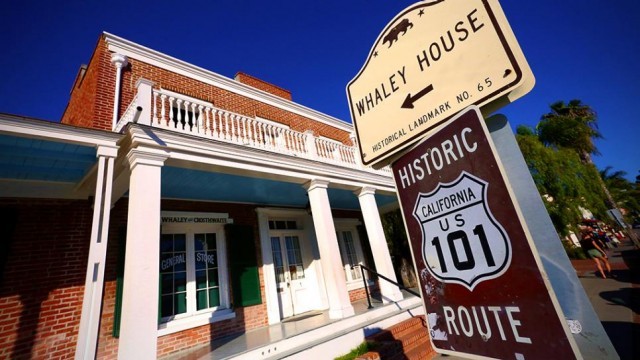 Sitting at 2476 San Diego Avenue, San Diego, California 92110, USA you will find this Greek revival styled old residence, now protected by save our heritage - this historic museum that was created by the wealthy business man Thomas Whaley back in 1857.

But the land in which Whaley build upon was a place of darkness and sorrow.

Whaley built his house on a graveyard where many souls reside and an execution site where many criminals and innocent people's lives came to an abrupt end. 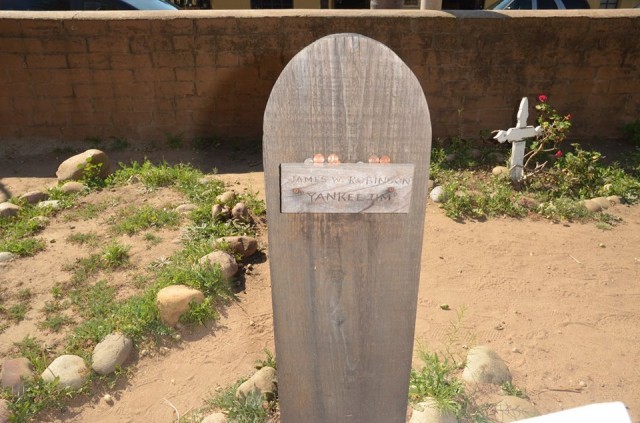 Thomas Whaley being fully aware of this and he himself actually witnessed the hanging of an allusive criminal Yankee Jim (James)Robinson - aka Santiago, who came to his death on the graveyard by being hung off the back of a wagon right where the Whaley House sits now. Thomas Whaley went right ahead and built the house without a second thought to what or to whom he may stir up. 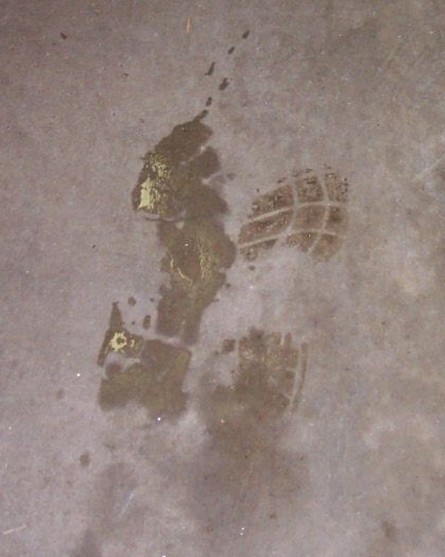 Once the house was completed Thomas and his wife Anna along with there 3 young children wasted no time and moved into brand new family home.

And it wasn’t long before rumours started circulating of the Whaley house was haunted.

Both Thomas and Anna both reported to hearing heavy footfalls passing through their home at night when it was silent as the night, and when investigated by Thomas he found nothing but an imprint of a grown man's foot. 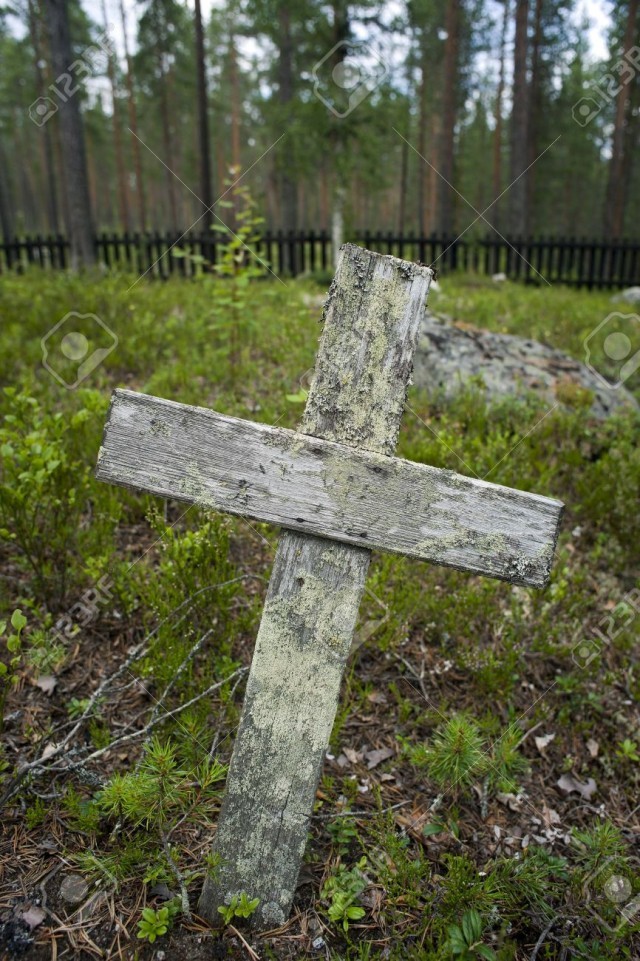 They hadn’t long lived there when they opened up a general store within their family home and life was going good for the family, but this was short lived and tragedy soon struck .

Their 18 month old baby boy, also named Thomas contracted scarlet fever and died soon after in the the family home and if that wasn’t enough a raging fire broke out and completely destroyed the general store only a few months after Thomas’s death. 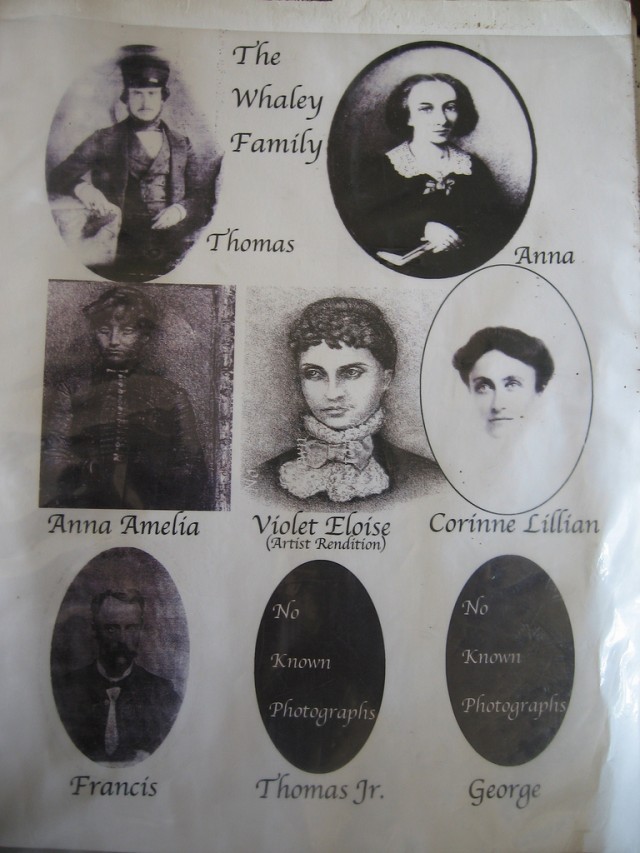 The family now living in sorrow and sadness decided to pack up and leave the Whaley house and headed to San francisco and that’s where they stayed for several years then in 1868 they decided to return back to their once beloved family home to raise their ever growing family which now consisted of 5 children. 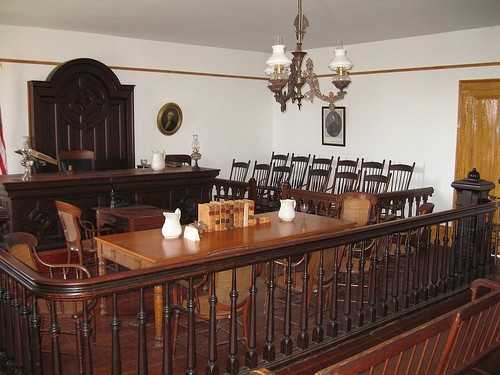 Picture of The Whaley House Courtroom.

Once back in their home, Thomas and Anna wasted no time in making their mark and some money.

The general store was once again open but not just that, now the Whaley house was bustling at the seams with San Diego’s first theatre troupe, and the house become the headquarters for the city’s courtroom.

Once again life for the Whaley family were good, and once again things took a tragic turn, and over the years things progressively deteriorated for the Whaley’s. 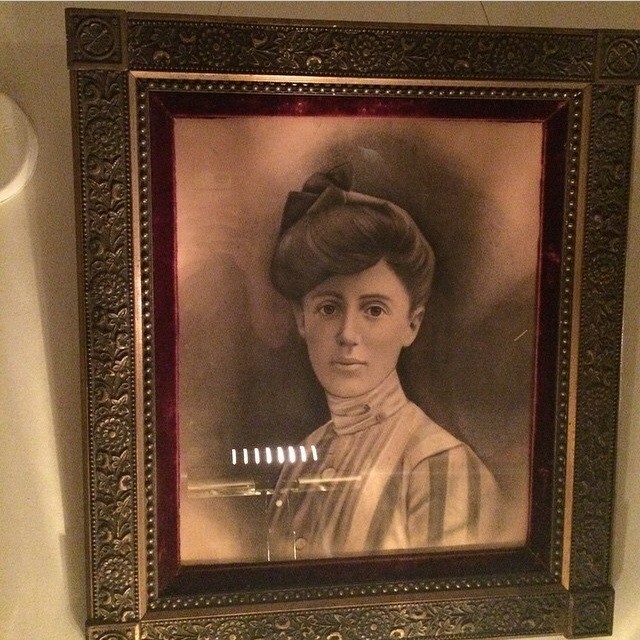 In 1871 Thomas Whaley was away on a business trip and Anna was left along with the five children when a group of dangerous armed gunmen broke in and held Anna at gunpoint as they stole all the courthouse records.

A few years later two of the Whaley daughters got married, both in the house itself but Violent the youngest of the two girls soon became unhappy and miserable within the marriage and could no longer remain married to her husband George Bertolacci and divorced him.

However Violet was so depressed and shameful with how her life had turned out she decided to end her misery and committed suicide.

On the 18th August 1885 Violet took a gun and shot herself in her chest resulting in her bloodied death. 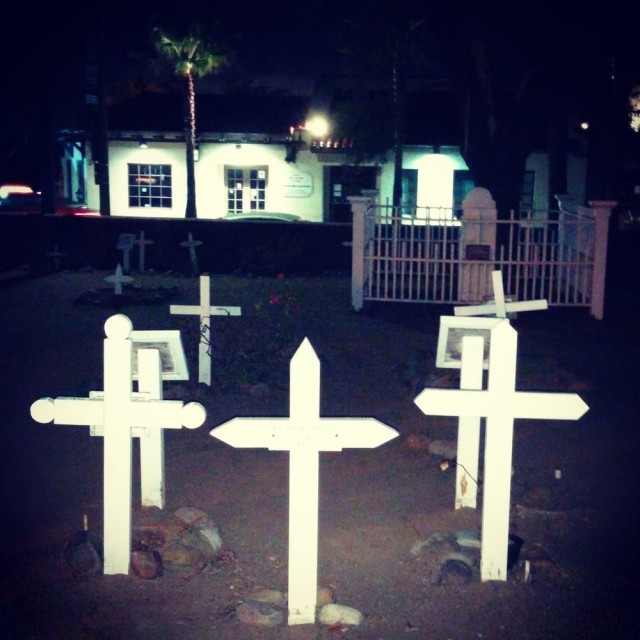 Violet wasn’t the only member of the Whaley family to have died in the family home.

In total 6 of the Whaley family lived and died in this house, which include, Thomas and Anna, and their children, Thomas, Violet, Lillian and Francis. 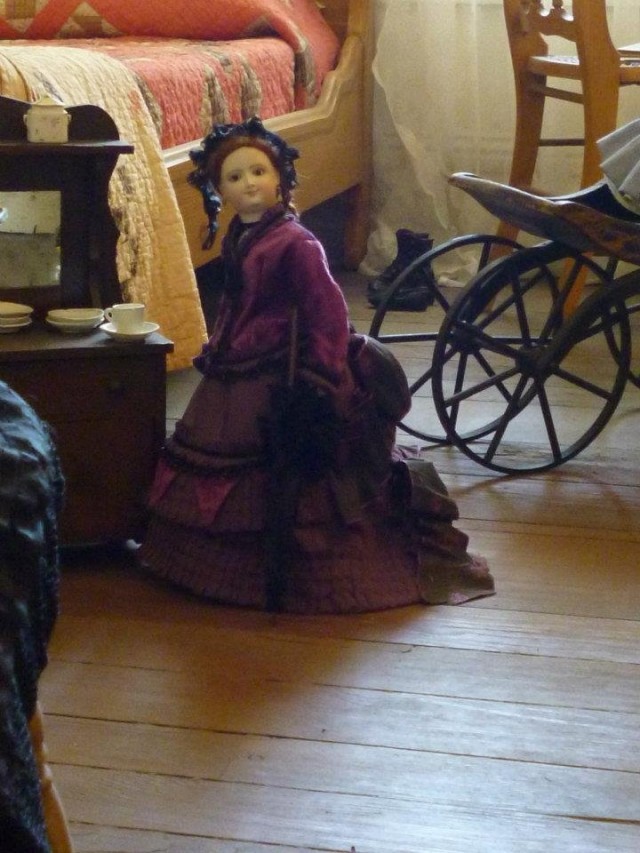 Inside the Whaley House and it's Ghosts and Hauntings

The Whaley house has seen hauntings right from the very beginning, starting right back in 1857 when the house was first constructed by Thomas Whaley

Right from the start Thomas and Anna claimed to hear strange heavy footfalls wandering throughout the house and the culprit is thought to be that of the criminal yankee Jim Robinson who came to his death on the very spot the house sits upon and as the time went on Jim made sure he wasn’t forgotten and taunted the family with creepy and strange noises throughout the night and would leave the outline of his foot print for all to see. 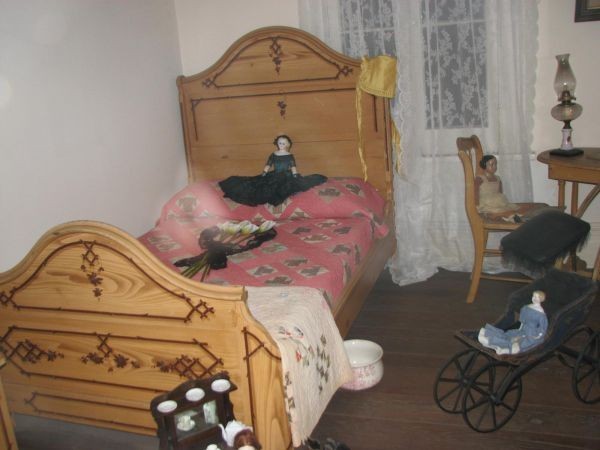 Even though baby Thomas passed away at just 18 months old, his family and visitors to the house would often hear his sweet giggles when no other children were about and  at night the wallowing cries from an infant can be heard. 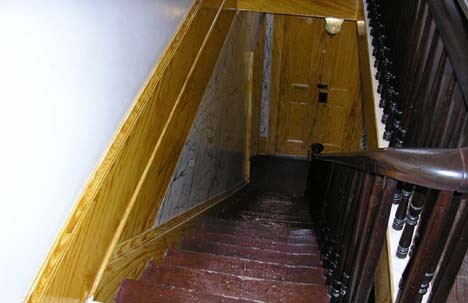 No one has lived in the house since 1953 and over the years restoration works have been carried out seeing all different workmen come and go into the building.

Most have claimed to have heard unexplainable noises from loud bangs, whispering, laughter, wallowing and even screams and crying.

Many report of seeing a young lady ghost who appears to be surrounded in sorrow up on the second floor is just aimlessly standing there, some people say that when they saw the lady ghost they themselves felt overwhelmingly sadness.

This sad soul is thought to be that of Violet Whaley who shot herself. 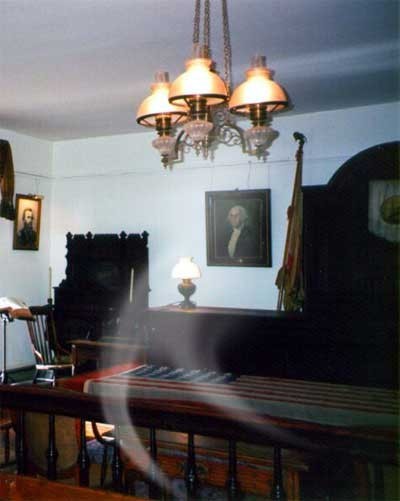 The ghost of Thomas Whaley himself often appears in front of visitors as he floats amidst the staircase, he appears to be smartly dressed in his best attire and hat.

He’s also been reported to wander the whole of the house and just appearing as when he feels like it.

Anna’s ghostly presence is also often here. Many people say that they can smell a sweet perfume wift past them and leaves a gentle calm feeling as it does so. 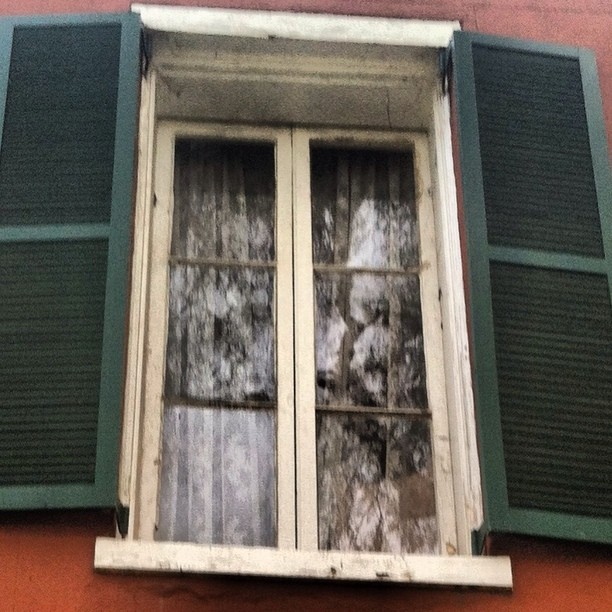 But that’s not all the creepy happenings here.

As well as the above hauntings, there are other ghostly goings on from strange noises being heard by the staff as they lock up for the evening and even strange mists and shadows and orbs which have been caught on camera.

You can even catch a glimpse of these ghosts just by walking past the building.

People have reported to have someone watch them from the window but when they look up no one is there but sometimes the curtains are moving, no one is the building and all the windows are closed. 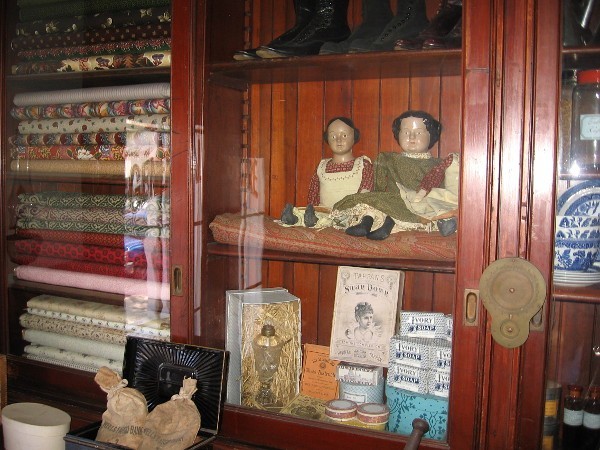