The Ettington Park Hotel – The UK’s most haunted property?

An imposing masterpiece of Neo Gothic Architecture, The Ettington Park Hotel has intimidated many a passerby during the course of its existence.

Every year, millions of visitors from around the world travel to Stratford Upon Avon in order to pay their respects to William Shakespeare, sup on a cream tea and stroll along the scenic River Stour. Only a small percentage of these tourists realize that the idyllic slice of Warwickshire countryside they admire is home to what some historians and paranormal experts believe is the most haunted building in Great Britain – The Ettington Park Hotel.

An imposing masterpiece of Neo Gothic Architecture, The Ettington Park Hotel has intimidated many a passerby during the course of its existence. Crafted from coloured bricks, steep turrets and tapestry- draped windows, this otherwise posh hotel has been the setting for some very strange phenomena indeed. Perhaps it is its ancient setting, its literary history or its swirling mass of lost souls – but something is clearly going on in Stratford-Upon-Avon. 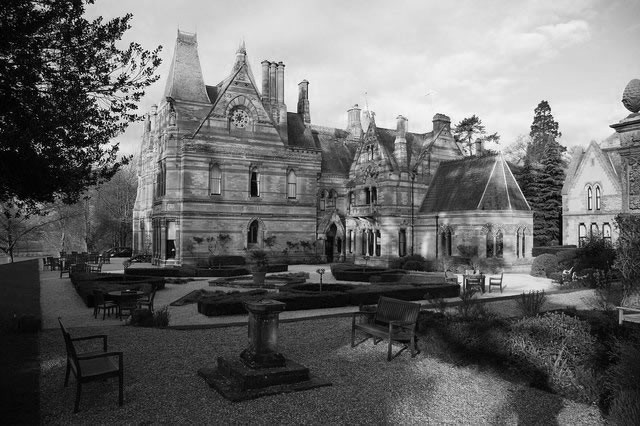 Set just outside the city centre (known in its own right for haunted walks, ghost tours and spooky cobbled lanes), The Ettington Park Hotel was built on the site of multiple Tudor era manors, and takes its name from the nearby estate of Lower Ettington. Archaeological surveys of the area show that humans have resided on this acreage for over 2000 years, some certain to have left their presence on these grounds.

The impressive Gothic Revival brick structure is an 1858- 62 remodeling of a much earlier house (thought to have dated to between the 18th and the 16th century) situated on the estate, with multiple additions added throughout the 20th century. Twisting staircases, long winding hallways, foundations thought to belong to a Roman temple – this is a truly bizarre and mysterious building that begs exploration from intrepid ghost hunters.

A Mysterious Book and A Dastardly Curse

Perhaps most telling of all is the strange case of the Sir Walter Scott book St. Ronan’s Well. This ragged old tome regularly comes tumbling off of the hotel library’s shelf and falls open to one page time and time again, despite the fact that the spine is not worn in this place.

What frightening portent does this page contain?
A merry place, 'tis said, in days of yore; but something ails it now—the place is cursed.

This ominous message has rightfully sent chills down the spines of many generations of Ettington Park visitors.

The most persistent – and malicious – spirit to haunt The Ettington Park Hotel must certainly be the Grey Lady. Seen by countless guests, employees and visitors, the Grey Lady is a mysterious female figure shrouded in thick white mist seen often in the Stour Corridor and other areas of the property. Alarmingly, guests have report losing control over their faculties when she is near, and finding themselves inexplicably drawn to the woman despite feeling abject terror. The Grey Lady is often accompanied by a cloaked monk, and many people report seeing them both together.

In the Victorian era, children had much shorter life expectancies than would be considered acceptable now; many wee ones passed away from maladies, accident and poverty. Such was the case at The Ettington Park Hotel when two young children, innocently playing on hotel grounds by the River Stour, were caught up in the current and swept away.

These drowned children are known to make themselves apparent to guests – most recently to a woman staying in the aptly named “Stour Suite.” She reported that two young children (eerily matching the descriptions of the long ago deceased pair) kept her awake all night by running up and down the stairs outside her room. No one else heard a thing.

The Oak Room Restaurant and the Main Staircase are both said to be haunted by the spectre of a sweet young maidservant who took a tumble down these accursed stairs following an argument with the Squire.

She does not appear to be malevolent, but her appearance is disarming to most nonetheless. Her tragic story is all the more heartrending considering that she is only one of many spirits thought to haunt this hotel – and not all of them are so kind.

Cinema Magic at The Ettington Park Hotel – The Haunted

The hotel was personally selected by director Robert Wise to serve as the exterior filming location for the 1963 classic horror film The Haunting (based on the 1959 novel The Haunting of Hill House by Shirley Jackson). Some of the film’s crew and actors were housed on site at the hotel for the duration of the filming, and rumors abound that actresses Julie Harris and Claire Bloom were frightened to even step foot inside the building because it was ‘scary looking.’ It certainly is!

Film historian Richard C. Keenan has described the hotel’s façade in the film as a "terrifying structure, a perception enhanced with the slight distortion and stark intensity of a wide-angle camera lens and infrared film stock." For many, this is their first introduction to The Ettington Park – for the rare brave few it will not be their last.

Can You Visit The Ettington Park Hotel Today?

After reading the above information, many people will want to steer clear of the property forever, but some morbidly curious individuals are sure to want to arrange a stay at the hotel – and this is absolutely possible, if you dare.

The Ettington Park Hotel has a fabulous reputation as the only AA 4 Red Star hotel in Stratford-Upon-Avon, attracting esteemed guests to its luxuriously appointed rooms, suites and facilities throughout the year. Touting itself as perfect for a romantic break or leisurely stay, clearly this property attracts many people for its slightly less macabre features.

Should you wish to visit Stratford-Upon-Avon and are willing to part with 150 pounds, a stay at the most haunted hotel in Great Britain is within your reach. We send you wishes for safe travels… you’ll need them.