The Black Monk Of Pontefract, UK.

FACT, this IS one of the UK’s most haunted houses...EVER. 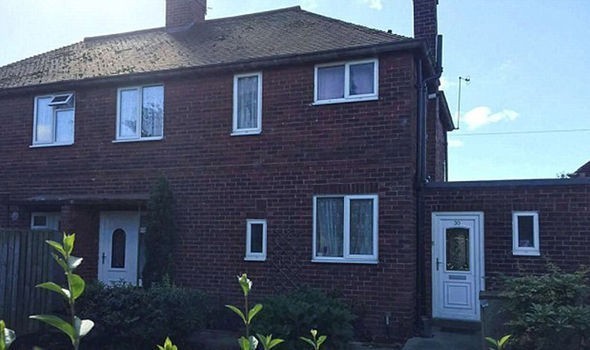 No one dares to live here and no one has since the 70’s , well, except for an evil and violent poltergeist

30 East Drive, Pontefract, East Yorkshire, UK is the address where the the most violent poltergeist, not just of the UK but of the whole of Europe resides.

But was once home to the Pritchard family. Mum Jean, father Joe and their two children Philip 15 and Diane 12.

What you're about to read is all very real. There are many reputable eye witness accounts from police officers and vicars along with captured evidence from investigations. This house has been investigated by many paranormal ghost hunting teams and now you, yourself can actually book out this semi detached house for your own ghost investigation. Are you brave enough to spend the whole night at 30 East Drive alone??

Here at creepy ghost stories think we are, keep a look out for our night spend with the black monk of Pontefract. 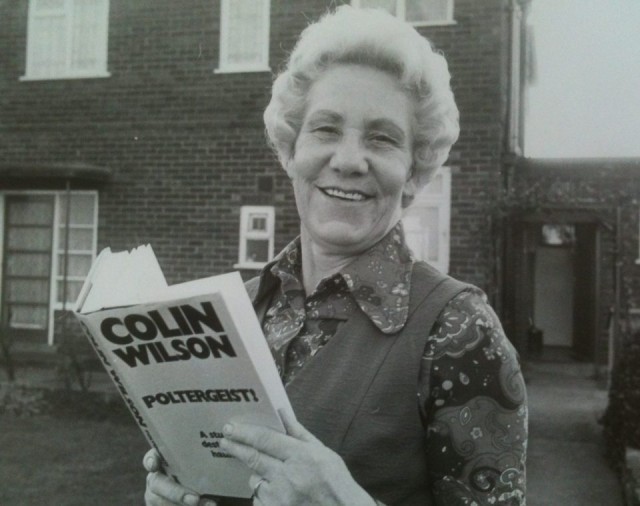 Above is Jean Pritchard,

So, it’s August of 1966, and the Pritchard family had just moved into their new family home.

The house was built right where hundreds of people came to their deaths many years before at the top of the hill, which was once the towns gallows.

They had only been living there for a few days when the first creepy occurrence happened. 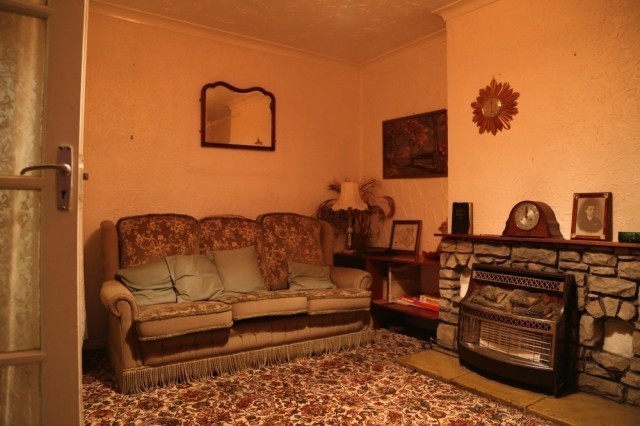 Jean, Joe and Diana had gone away for the August summer bank holiday weekend, but Philip stayed at home in the care of his grandmother Sarah Scholes.

This weekend was a hot one,very still and with no wind, even with the windows and doors open there was no respite from the humidity.

Sarah was in the house and throughout the day kept feeling a cold wind brushing past her and tingling her skin and when Philip returned home, he walked in and saw a soft chalk like substance fall from the ceiling and cover the living room carpet. Paranormal activity was the furthest thing from the grandmother and Philips mind, but they were still baffled into where the chalk and wind had come from.

Sarah asked her daughter Marie Kelly lived just across the road  to come over to the house to see if she could make any sense of what the white powder was.

As Marie went to go into the kitchen to get cleaning equipment to clean up the powder she opened the door and slipped on the floor.

A big puddle of water was laying in the middle of the floor.

Enid Pritchard one of the neighbours heard some commotion coming from number 30 so went round to see if everything was ok.

Thinking there maybe a water leak she turned the water off at the main cock.

Over the course of the day, white flakes fell and water puddles appeared from nowhere.

There was no evident water leaks and the white powder continued to fall from space.

They reported to the water company that they suspected they had a leak and someone was sent out that afternoon to investigate.

He done all the usual checks and couldn’t find a water leak and put the puddles of appearing water down to condensation.

Soon after the puddles of water stopped appearing.

It was early evening and Sarah was settling down in front of the tv when Philip started shouting from the kitchen that it was happening again.

Sarah jumped up to see what was happening. She couldn't believe her eyes at the site of the kitchen.

Only moments before it was clean and tidy now though it was a complete mess.

The worktops had tea leaves and sugar all over them, they both stared in disbelief and as they did they witnessed the tea dispensing button being pushed in and out and watched on as more tea leaves were released over the counter top until it was empty, but the button kept didn't stop being pushed. Sarah now starting to feel scared started shouting at it to stop, but it didn’t

There was a big loud bang that came from the hallway, they quickly went to see who or what had made the bang, but there was nothing but empty silence and darkness, that is until the light switch on the wall clicked itself on.

Both now feeling a bit on edge went to bottom of the stairs and again was left in disbelief.

There halfway up the stairs stood a plant that is usually by the front of the house and if that wasn’t strange enough the pot in which it sits in was at the top of the stairs. 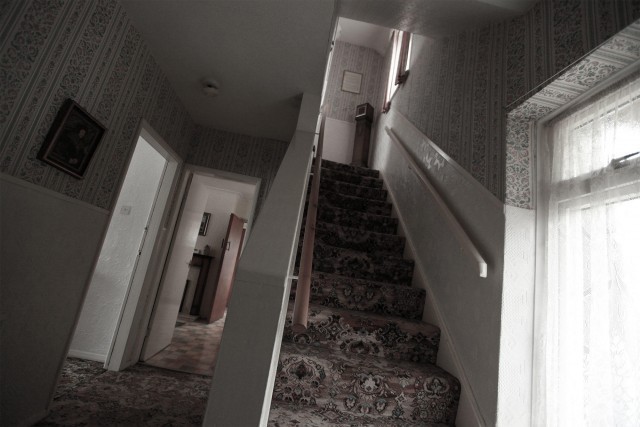 Feeling pretty scared now, but soon to be made even more so.

Still standing confused at the bottom of the stairs they then heard more weird noises coming from the kitchen.

As they crept up to the doorway to see what happening now they were greeted with a violently shaking crockery cupboard.

Philip being brave went up to the cupboard and flung the doors open and the shaking just stopped, but as it stopped, BANG, there was another loud bang which came from another room in the house.

The Grandmother then felt the cold air she felt earlier on in the day and was feeling pretty petrified now, she rushed over to get Marie Kelly again and as soon as they entered the kitchen the crockery cupboard once again started to violently shake, unable to believe what was she was seeing Marie went the adjoining neighbours Mr and Mrs Mountain to ask if they were responsible for banging against the kitchen walls, there reply was “we thought it was you” 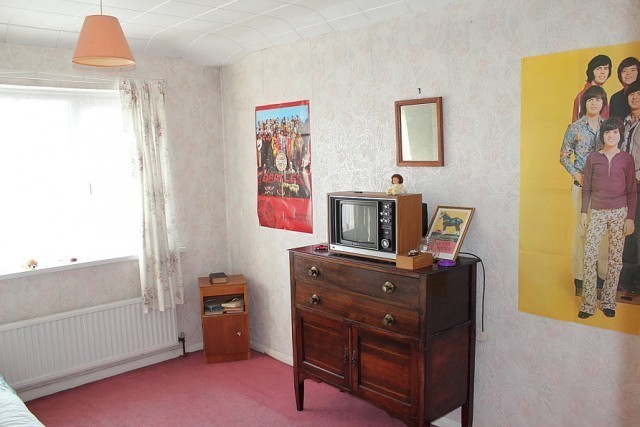 Things calmed down and Sarah, Philip and Marie talked about what they had all witnessed throughout the day and evening and non could come up with an explanation.

It had been an eventful day to say the least and Philip took him self up to bed.

Before Sarah retired herself for the night she went in to check on Philip to make sure he was ok and was yet again scared out of her wits.

As she entered his room the big heavy draws started to move and shake.

That was it, she got herself and Philip out of there pretty swiftly, fearing for their lives they took refuge at a neighbouring friends. 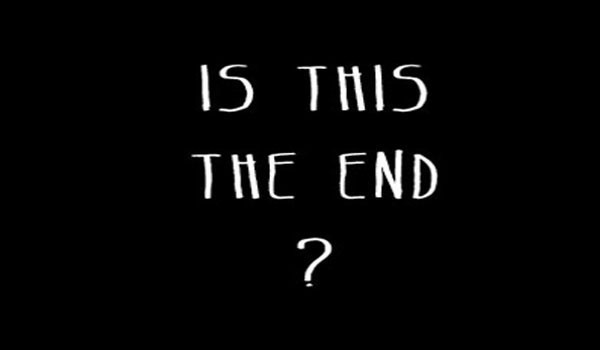 Joe, Jean and Diana returned home from their holiday and was told all about the creepy events that had happened. But with nothing else occurring over the following weeks they were a little sceptical.

For the next 2 years the family lived in peace.

That is until one day,out of the blue this poltergeist wanted to play again.

And play it did.

This time however it wasn’t just for the day, this time it stayed around and provoked and scared the Pritchard family for the next 7 years.

Click here for the next chapter.. Seven years of hell.