Myrtles Plantation - The Most Haunted Home in the States

Built in 1796 Myrtle Plantation is visited by ghost hunters and paranormal enthusiasts alike, but just what lies within the walls of this exquisite mansion house, and can it really be the home to a dozen ghosts?

The Deep South is well known for its rich history, and being at the centre of the American civil War and the Slave trade makes for some-grizzly tales of old. The Myrtles Plantation was built by General David Bradford,or ‘Whisky Dave’ of the Whiskey Rebellion, and this stunning mansion has seen its own share of horror over the years.

The Myrtles Plantation was allegedly built on an Indian burial ground, it wouldn’t surprise me if there were quite a few restless Native American spirits hanging around the Oak-lined grounds, angry at the final insult of a mansion built on what was once their sacred land. Could this be part of why the Myrtles Plantation seems to be such a hub for paranormal activity? Certainly it would explain why the ghost of a young Indian girl has been reportedly seen in lush grounds.

During the Civil War, the mansion was ransacked by Union soldiers and it’s said that three people were killed during the attack. Reports of a large blood stain in the doorway that refused to be removed by cleaning dates back to the attack on the house. Even more intriguing is the story of cleaning staff not being able to push their brooms and mops over the area. Perhaps bricks and mortar are indeed capable of absorbing energy from horrific events and the victim is making sure they are never forgotten…

The only certified death at Myrtles Plantation is that of William Drew Winter who was shot on the porch and staggered indoors before drawing his last breath on the staircase. Reports of sightings of an injured man crossing the hallway and collapsing on the 17th step are rife,and William is one of the most easily identifiable spirits lingering in the Myrtles Plantation. 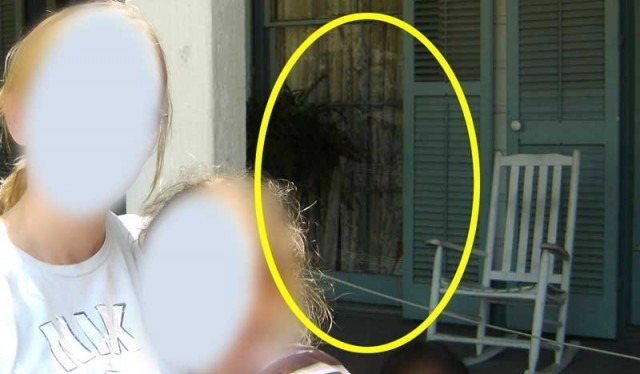 The famous ‘Ghost Girl’ photograph continues to baffle experts and paranormal investigators alike. A seemingly simple photo of a teacher and her students turned into an spirit phenomena when the image of a young girl was spotted lurking in the background. The Ghost Girl is wearing antebellum clothing and can clearly be seen staring directly into the camera.

Could this be the ghost of one of two children allegedly poisoned at the plantation? Speculation is rife, but this photo sends chills down the spine in its clarity. The girl’s features can clearly be seen, and her expression is morose. Photographers have studied the photo and can see no signs of doctoring. The photo of the Myrtles Plantation Ghost Girl remains as intriguing as it is chilling.

The Legend of Chloe

One of the most popular legends of Myrtles Plantation is that of the slave girl Chloe and her cautionary tale of affairs, revenge and murder. After David Bradford built Myrtles Plantation (then known as Laurel Grove), it passed hands numerous times until the Woodruff family bought it. Clark Woodruff, his wife Sara and their children made Myrtle Plantation their home in 1817, and employed a slave girl by the name of Chloe.

Clark took a shine to Chloe and frightened of losing her place in the home, the young slave began an affair with him. After a short while,her master began to lose interest and Chloe once again feared she would end up working back in the fields. When Chloe was caught eavesdropping on the family to try and discover her fate, she was caught and had her ear chopped off as punishment!

As the story goes, Chloe baked a cake for one of Woodruff’s daughters and laced it with deadly poisonous oleander flowers. Of course no one can really know what Chloe’s motives were for this heinous act – perhaps she thought if the wife and children were ill she could nurse them back to health and secure her place in the family home, or perhaps her motives were those of revenge and of a woman scorned.

Whatever Chloe’s motives, Sara Woodruff and he two daughters were dead within hours, and the other slaves dragged Chloe out into the grounds and hung her from the tree, afraid of retribution from their master. Chloe’s body was weighted and thrown into the river, but it seems her spirit failed to rest.

Sightings of Chloe are among the most prevalent at the Myrtles Plantation, with guests and staff reportedly seeing a woman wearing a green turban lingering around the grounds, followed by the wails of crying children. More chillingly, guests have spoken of waking up to find Chloe stood at the foot of their bed, staring at them blankly. It seems of all the hauntings of Myrtle Plantation, Chloe’s is surrounded in the sweeping intrigue of a young woman drawn into an ill-fated romance that could only end in tragedy.

Sara Woodruff and her daughters

It is said that when a person dies, all mirrors in the room must be covered to prevent the spirit entering the cold, reflective surface of the glass. When the slave girl Chloe poisoned the birthday cake of the Woodruff girl, death came on swift wings for the poor child, along with her sister and mother, Sara. In the midst of the anguish surrounding their deaths, a mirror that hung in the room where they died was overlooked and failed to be covered.

‘The Myrtles Mirror’ is now among  one of the most haunted objects in the world, as reports of children’s hand prints on the glass and the reflection of a woman are often seen in the mirror. Could mirrors really trap the spirits of the recently departed? Those who have witnessed the Myrtles Mirror phenomena certainly think so! Mirrors feature in many paranormal stories, and superstition dictates a new baby should never be shown its reflection, so the next time you consider buying a second hand mirror, you may want to think again…

These are just a few of the ghosts and legends associated with Myrtle Plantation. There are more to share, of voodoo practices and restless spirits, and the house has been investigated over the years by sci-fi channel’s ‘Ghost Hunters’, ‘Unsolved Mysteries’ and The Paranormal Society captured EVP recording and sightings of orbs and shadow people. Also check Ghost Adventures Myrtle Plantation episode which can be found here.

With such a rich history, it’s not hard to imagine some of that may have seeped into the bricks and mortar of this palatial home and it certainly attracts those interested in delving further into the mysteries of the place. Myrtles Plantation is now a thriving bed & breakfast, and features on the bucket list of ghost hunters and thrill seekers across the world. For more information on this paranormal paradise, check out their website. www.myrtlesplantation.com