Mary King’s close is an underground street that was in use back in the 17th century. Streets just like this were built all over Edinburgh, during the modernization of the old town.

Mary King’s close is an underground street that was in use back in the 17th century. Streets just like this were built all over Edinburgh, during the modernization of the old town. The lower floors became the foundation for the Royal Exchange, built in 1753, and over 250 years later the floors are largely unchanged.

During the worst of the war, they were used as an air raid shelter.

They now act as the City Chambers. Their name is thought to originate from the property owner, who was a great support of Mary, Queen of scotts and who also named his daughter Mary.

The close has had an extensive reputation for haunting since at least the 17th century. It may be because of its close existence to a stagant and very, very polluted marsh, Nor Loch. Swamp gas regularly seeps into the close, reportedly, and may be the cause of the eerie lights reported by visitors. It’s been known to cause hallucinations.

But there may be more to it than that. Back in the 1600’s, the close was a busy street full of relatively happy people who lived, worked, and prospered. However, in 1645, disaster struck in form of the Bubonic Plague. People began to develop symptoms quickly in such an enclosed space, and soon everyone was either ill or taking care of the sick. In a heartless decision, and in an effort to keep the illness from spreading to the rest of the city, the local council had the close bricked up in secret.

Everyone down there was trapped inside, and left to die. After a few years, it was opened up again and cleaned out. Forever after that, the street was referred to as the street of sorrows.

While many claim this story to be true, it is simply not supported by factual, historical record.

Although hundreds of people perished in the close, doctors and nurses brought them food and drink, aired out their houses, scrubbed and cleaned and did everything they could to save the poor souls below. 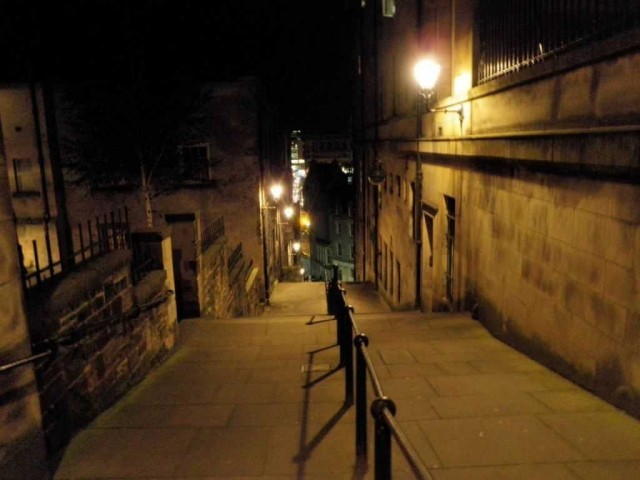 One ghost is particularly famous, a little girl by the name of Annie

Said to have originated from the time of the plague, Annie has been looking for her lost doll for centuries. It was likely removed when the council sent people down to clean the tunnels out after the extensive death. Perhaps it was removed and burned with her body. In sympathy, hundreds of visitors have left gifts for her and now, she has a room filled to the brim with toys.

After the plague had passed through and the close was safely reoccupied, stories and rumours began to get around that the dead were coming back to their homes in the close. Maybe it’s only natural, considering the extent of the tragedy. The close’s reputation for hauntings was boosted massively in 1685, when a professor of Maths and philosophy published a book called Satan’s invisible world discovered.

The book detailed numerous supernatural happenings, and was hugely popular in its day. One of its tales concerned the close, and centered around Mr. Thomas Coltheart, a law agent and his beautiful wife. The couple reportedly moved into a house in the cloe and brought a maid with them. Unfortunately, the maid was freaked out by the scary stories the neighbours told, of hauntings and of death, and refused to work there any longer, and left the family.

Mrs. Coltheart was sitting and reading her bible passages, waiting for her husband to come home when a grey bearded old man’s head-just his head- appeared in from of her. Understandably, she fainted and her husband found her passed out when he came home. She tried to tell him what she saw, but he put it down to hysteria and blew it off. Apparently, the spirits didn’t appreciate it because that night, as they lay in bed, the ghost appeared in front of them both.

They prayed, and that particular ghost went away- but not for long. It came back and brought friends to confront Mr. Coltheart all throughout the night! One of the spirits, appearing as only an arm, wanted to introduce themselves and tried to shake Mr. Coltheart’s hand.  Mr. Coltheart freaked out and demanded to know why the ghosts were bothering them.

They never got an answer, but a cat and a god’s spirits came to join the party. Finally, too afraid to think of anything else, the couple began to pray in earnest for deliverance. Suddenly, they both heard a loud and terrifying groan and the ghosts left, never to bother the colthearts again, who lived the rest of their days happily in the close.

The next residents were not so resilient, however- when visited by the head of the grey man, they ran right out of the house and never returned.

These days, the close operates as a tourist attraction and historical tour.

Hauntings are still reported to this day.