It was originally built in 1892 by Charles and Kate Eisenbeis, successful immigrants and prominent members of the early business community in the area.

Their business interests were diverse including brick works, a bakery, a brewery, and a hotel. The couple was so powerful within the community and well liked that in 1878 when the town became the first incorporated city in Jefferson county, Charles Eisenbeis was elected mayor by his peers.

It was then that he decided that he would build a home that fit in with his social status. 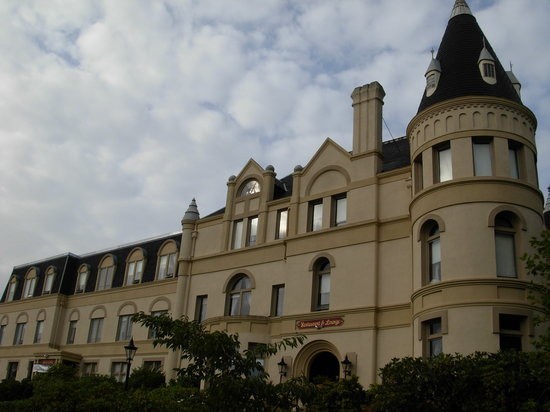 With 30 rooms, the Port Townsend community began to refer to the extravagant home as the Eisenbeis Castle.

The walls were 12 inches thick, constructed with bricks from the couple’s own brick works. What they saved by using their own materials went into the rest of the house. The couple had a slate roof installed and brought German Artisans in specially to create the beautiful fireplaces and fine woodwork within the home. Immediately after the home was built, things began to take a turn for the worse for the unfortunate family.

Their son, who was also his father’s partner in business, felt he could no longer go on and killed himself at their real estate office. His father was devastated. Five years later, after only ten years in the beautiful home, Charles passed away in 1902. Kate remarried years later, leaving the home, which stood empty for about 20 years until it was bought by Jesuit priests as a place of study.

With the new tenants came new additions to the home. It was expanded to hold a chapel, more sleeping rooms, and even an elevator. It was renamed Manresa Hall in honor of the spanish city where their order was founded.

It was during the time of the jesuits that the most popularly considered death happened. Just like Charles's son, he felt he could no longer go on, and hung himself in the attic directly above what is now known as room 302 in the modern hotel. People have claimed, when staying in the room to hear his footsteps on the ceiling above them.

But perhaps the most active of the spirits thought to haunt the building belongs to Kate?

Kate was a woman who stayed at the redone hotel in the 1920’s, in the famous room 306. While staying there, she received the devastating news that her lover had died at sea and jumped out of the window to her death, hoping to join him.

People have witnessed her looking out of the window, or even standing over them in bed.

Despite these accounts, most of the activity at the hotel seems to involve electricity. It is reportedly common for the lights and other appliances to flicker or turn on and off at random. While this is explainable, what isn’t so easy to explain away is the reports of glasses in the restaurant and chapel exploding or turning upside down all by themselves.

The activity is so common that the hotel has put ghost registers in the rooms so that people can write on their experiences for future guests. This has backfired, however- upon reading them, some guests have demanded different rooms.