How to Communicate with Spirits

It's not so easy for those without sight to communicate with spirits. Try these simple methods to get your message across.

I’m a medium, and I can communicate with spirits pretty much whenever I want to. But for those without sight, it can be hard to get the message across, or to receive it when it’s necessary. You may want to communicate with the dead for a variety of reasons- maybe it’s something as simple as it being Halloween night, maybe you’ve recently lost a loved one, or most likely you’ve moved into a home you believe to be haunted. While these methods will work best for those in haunted homes, they are sometimes effective in other ways.

Any kind of activity is incredibly draining for spirits, who have used all or almost all of their soul’s energy up in life. These methods will allow spirits to communicate in ways that don’t require a lot of effort. 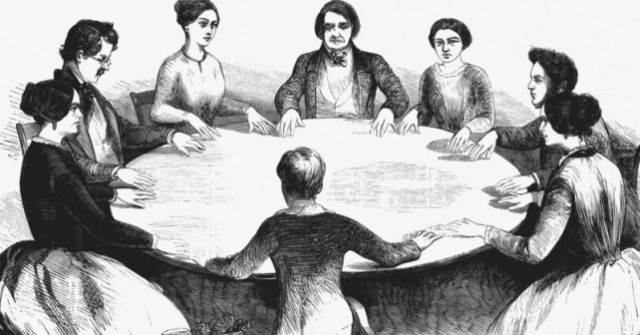 Just talking to them

If it doesn’t matter so much if you get an answer back or not, you could try simply talking to the entity you think is there. This is a common method, the most common in fact. The important thing is to do so with respect- no matter who or what you think you’re talking to. This is because spirits can represent themselves in all kinds of ways.Inhuman entities can easily make themselves look or sound like an innocent child- and in fact, if they have been using that form to frighten you the childish glee may be genuine.

They commonly use this kind of form to garner trust with people, and will also use the form of a relative, elder or animal if they think it will get them any farther. If you speak to every spirit you meet with respect, you minimize the chance of offending them, and causing them to grab onto you and get in your face.

It is very easy to garner an unwanted spirit attachment, and therefore the only time you should become aggressive or emotional with a spirit in any way is when you are telling them to leave. This is a particularly hard, as it is a natural reaction to become afraid, nervous, or sad around a spirit. Keep calm, and if you can, keep your face expressionless.

Put alphabet magnets on the fridge

This is similar in theory to the pads of paper, but is even easier for spirits to do, because they don’t have to pick anything up- they only have to push a magnet along on the fridge to make words. Put more than one set, so they have more than one letter to work with when making words. This is a commonly depicted phenomena in movies and on TV, but it does happen in real life- although some people find that the magnets will slowly begin to go missing and show up in other parts of the house. This is another kind of phenomena altogether, known as

There are two kinds of Apports. The first kind apport can be anything- keys, magnets, beads, etc that spirits like and decide to take. Shiny or non shiny, useful or not, these kinds of apports are often taken and then returned at random intervals simply to cause inconvenience for the person the item belongs to. In one house we lived in when I was a child, my pencil boxes kept going missing- up to a count of 6. On the day we were moving out, I returned to my bedroom to get my budgie in her travel cage and found that my pencil boxes had been returned to my now empty bedroom- stacked up in a kind of pyramid in the middle of the floor. I would have blamed my brother, but he was almost as small as the pencil boxes at the time.

The second type of Apports are usually small, round, shining metallic balls that look a lot like ball bearings. They can also be stones, or insects, but I have most commonly seen the balls. They come from nowhere, and may simply drop out of thin air above your head. It is said that these are meant to be gifts, and if a spirit gives you an apport you should keep it forever. I currently have three apports kept in my altar box, two of the shining balls, and one clear stone that hit me in the side of the head one day while reading- at home, and alone.

It may seem rather horror movie esque, but using an older TV with a radio tuner may help you communicate with spirits. Simply put it to a station of snow, and listen and watch carefully for communication. You can try talking to whoever you are trying to communicate with, but commonly communication will come when you least expect it.

However you decide to communicate, always remember to do so with respect. Good luck!