In the last couple of years I lived in a Victorian house that had at least one very restless spirit which often made its presence felt in one way or another. What follows is an account of my time at the house.

Moving into our new home was a dream come true; a four storey Victorian town house in a lovely area, with more than enough room for a family to grow. The first time I viewed the house, I knew we wouldn’t be alone there. Each room had its own echo, its own shadow, and whilst it wasn’t a comforting experience, I didn't feel anything malicious.

The house was beautiful, with high ceilings and huge, airy rooms, the attic had been split into two bedrooms and there was a stone cellar that had been servant’s quarters.

It was shortly after we moved in that the first paranormal occurrence happened. I was alone with my youngest child in the living room, with the door open into the long corridor leading into the kitchen. I stood up from the floor where I’d been playing with my baby and as I did, I saw the open doorway through the mirror. A figure walked past the doorway as I watched, just as one of the family would have done when entering the house and bypassing the living room. There was nothing rushed about the apparition, just a grey figure strolling past the doorway as if it had done it countless times before. I wasn’t surprised – slightly unnerved, yes, but not surprised. I considered following the figure, but thought better of it.

The doorway figure became a regular at our house, either standing in the doorway or walking past as before. Not so bad in broad daylight, slightly more chilling at night. Although I couldn’t be sure, this apparition had a ‘male’ presence. I couldn’t make out features but the build appeared male.

Then came the night I’d gone to bed early with our baby and I thought I heard my partner running upstairs. I sat up in bed, expecting to see them in the room but they entered five minutes later looking visibly shaken. The doorway figure had run past the living room this time, and my partner had watched the apparition run upstairs and turn to run up the second set of stairs before disappearing. I went up to the attic to check on my older children, and their bedroom lights were out. Neither slept with the light out.

Thus began the problem with the lights. Something began interfering with the living room lights first, then the bedroom lights would switch off and I felt a presence different to the doorway apparition. She (for some reason I ‘felt’ this one was a she), became more evident in other rooms of the house, the staircase or the attic bedrooms predominantly. Lights that had been off were suddenly on, and rooms that had been illuminated were suddenly thrust into darkness.

One can only imagine how many families might have come and gone in that house. It had been built in the late 1800’s,and had been changed very little over the years. Although we only spent twelve months living there, our restless ‘house mates’ were with us from the get go.The doorway figure became a mainstay, the interference with the lights became common place, and shortly before we left the property for new horizons, a third occurrence was about to chill me to the bone. 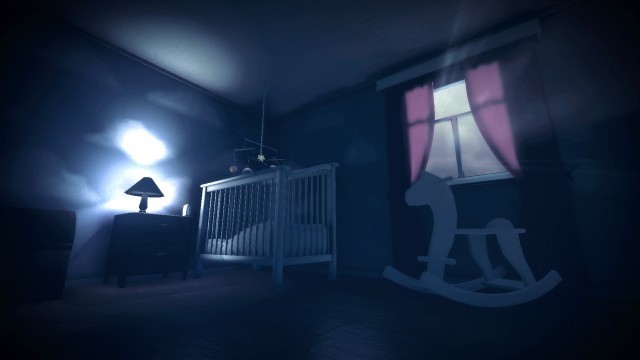 Our baby always had trouble settling in her new room

Many times I’d been in there settling her only to feel like there was someone behind me. Of all the feelings I’d had at the house, this one was the most unnerving, and more often than not I’d take her into my bed to sleep.  One night as I lay next to her,patting her back and singing her to sleep, I became aware of a presence walking up and down the room behind me. I’m not ashamed to say I froze on the spot. We were alone in the house that night, and behind me the floorboards were creaking in the same way they would if I’d been walking up and down the length of the room.

Living there for a year, we knew each creak and groan of the old place, and this was definitely the sound of someone walking the old floorboards of our baby’s room. It went on for a good while,longer than an hour, with me lying there trying to rationalise what I was hearing whilst mustering the courage to pick her up and take her to my room!

I finally came up with something that allowed me to fall asleep. When my baby was smaller, I’d often held her and walked up and down the room, rocking her to sleep and singing her a lullaby.Perhaps this was some parent from long ago doing just the same – we were keeping each other company in the wee small hours settling our babies. In a home that had no doubt seen countless families, it seems only natural the bricks and mortar might just soak up some of the energy those families left behind…

Has anyone else experience anything similar to me?