If you’re looking for a haunted getaway, you might want to consider the Adelphi Hotel in Liverpool, UK. With a rich history and many shared paranormal experiences at the venue, it’s no wonder the Adelphi has been named the most haunted hotel in England.

If you’re looking for a haunted getaway, you might want to consider the Adelphi Hotel in Liverpool, UK. With a rich history and many shared paranormal experiences at the venue, it’s no wonder the Adelphi has been named the most haunted hotel in England by paranormal writer and expert Tom Slemen.

The present Adelphi is a grade II listed building, and the third to be built on the site. The first hotel dates back to 1826, with the second being built on the same spot in 1876, and the present building dating back to around 1911-12. Is it really such a surprise that a hotel with so much history has its fair share of spirits lingering within its walls? Just imagine the amount of staff and visitors walking through the venue over the years – and they didn’t all come out alive… 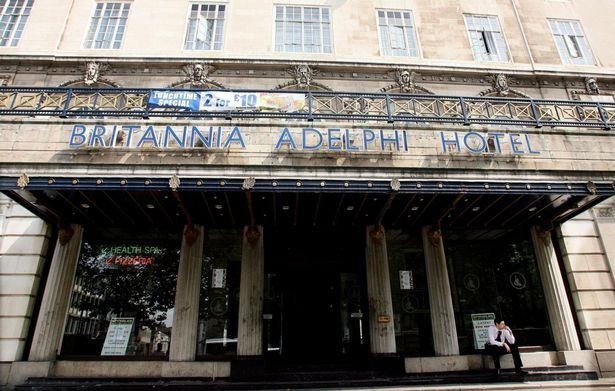 So what can you expect from a visit to the UK’s most haunted hotel?

Paranormal experiences have been reported at this site for years now, and some are far more disturbing than others. The apparition of a 15 year old bell boy, complete with cap and uniform has been known to pick up visitor’s luggage before mysteriously disappearing. The ghostly bell boy is thought to be Raymond Brown who died after getting trapped in a baggage lift in 1961.

Another more gruesome death at the Adelphi was that of ‘George’, who committed suicide in the hotel during the 1930’s and has been seen calling to passers-by from one of the windows. One can only imagine how this poor soul spent his last few hours alone in his room, and the possible imprint such a traumatic death may have left on the fabric of the building.

A pickpocket ghost resides at the Adelphi Hotel, too. This female thief has been seen searching through the belongings of guests in the small hours of the morning, always disappearing before their eyes when confronted. Who knows what this woman is looking for, or what her story is.

Imagine waking up to the sight of a young woman with long black hair and wide staring eyes standing at your bedside. You might just, if you stay at the Adelphi.  No one knows the history of this particular apparition, but she has a penchant for stroking the hair of male guests.

This spine-tingling apparition stands behind people in the elevator, whistling and breathing down their necks.  There’s no record of who this particular spirit might be, but they have been known to tap passengers on the shoulder! Clearly this is one ghost intent on getting people’s attention, but as to why remains a mystery!

One of the most enigmatic apparitions may have been in the present Adelphi since it was built. It was 1912, and the Titanic was to set sail from Liverpool to America filled with well-off passengers, many of whom had booked into the Adelphi.

We all know how that voyage ended, so wouldn’t it stand to sense that passengers who lost their lives aboard the ill-fated liner would find themselves bound to the hotel that had been their last residence before meeting a watery end? Of course that’s just conjecture, but there seems to be some truth behind it as our final paranormal experience outlines.

Tom Slemen a paranormal writer and expert recounts a time when he witnessed the appearance of three apparitions in the Sefton Suite of the Adelphi, which incidentally is a replica of the Titanic’s First Class Smoking Lounge.

The three men wearing naval uniform appeared at the far end of the room much to the shock of the audience – and disappeared into thin air just as quickly as they’d arrived. Could these three naval ghosts have been part of the Titanic crew? Tom later described the apparitions to a member of staff, and was told he had seen the spirit of Captain Edward Smith who went down with the Titanic, along with two unknown crew members.

Stories of apparitions and paranormal experiences abound in this old hotel, from the ones we’ve looked at here to a Victorian lady in grey, bustling about in the basement to someone hanging out of a bedroom window that turns out to be locked.