We all know that houses can be haunted and even the devil can possess us but what about haunted and cursed everyday objects? 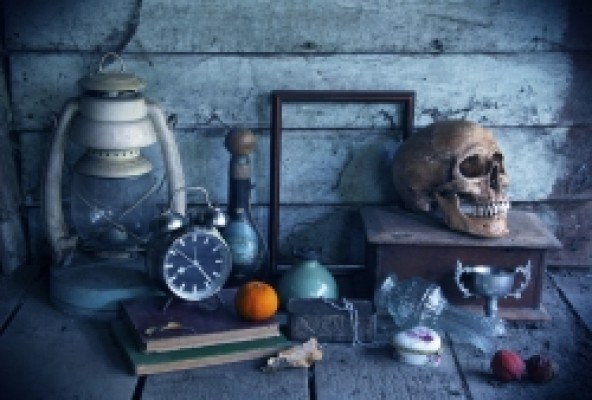 Lots of us have our lucky objects, some may have a lucky penny that they carry around in our purse or wallet and others have a lucky rabbit's foot on chain or keyring.

We carry them with us to bring us good fortune and luck.

But what about the flip side of lucky? 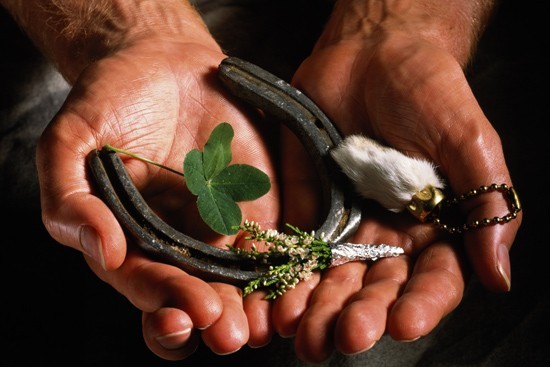 Some of us have our bad luck objects.

Have you ever bought something from an antique shop or from a second hand store and all of sudden bad luck seems to follow you and nothing goes right for you?

Maybe that antique doll you bought or the victorian style ring is more than that, just maybe it’s been cursed by a vengeful witch or even being haunted by a scorned soul 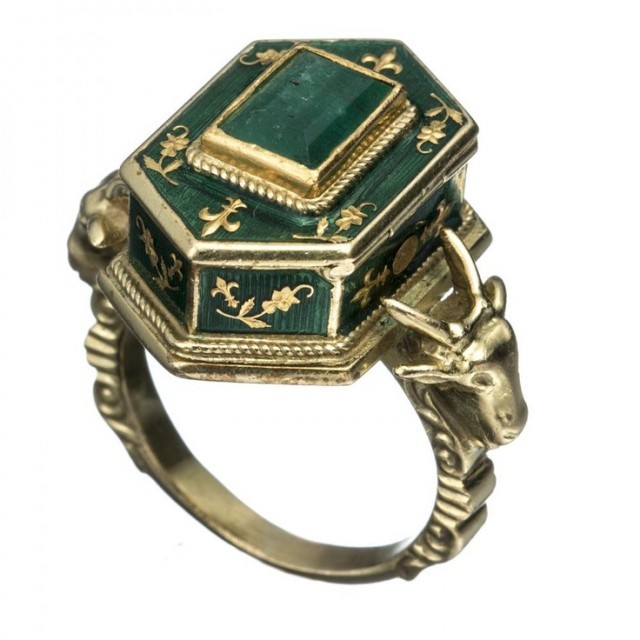 People have been reporting for years of their possessions being haunted and why shouldn’t they be.

Spirits can attach themselves to homes, building and people and even to the great outdoors so why not objects. 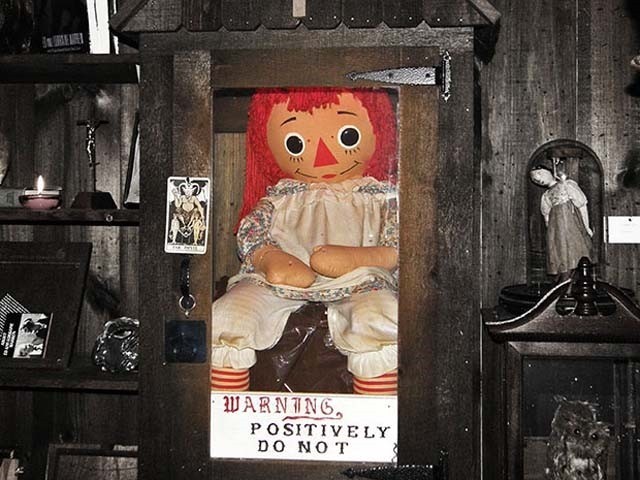 No doubt we’ve all heard and seen the film the conjuring with the creepy Annabelle Doll but did you know that the doll is actually real.

Given as a gift to a daughter as she flew the nest and headed off to college away from home in 1970.

Once in her new digs with her friend strange things started happening.

Their personal belongings were being moved around and even Annabelle was found in different locations of the house, then one day the girls came home to find paper with child like handwriting in crayon on it, Annabelle was sat there besides it.

However a male friend of the girls disagreed and thought the doll was evil and was being possessed by the devil.

The very next day he found alone in his room dead, he had been strangled.

Annabelle was found in his room.

Not knowing what to do the girls seeked help from well known ghost investigators of that time.

Ed and Lorraine Warren and they discovered that the doll was a conduit for demons.

They performed not one but two exorcisms on Annabelle but still the doll remained evil.

The doll still possessed was placed out of harm's way under lock and key in the Warren’s occult museum and is still there to this day. 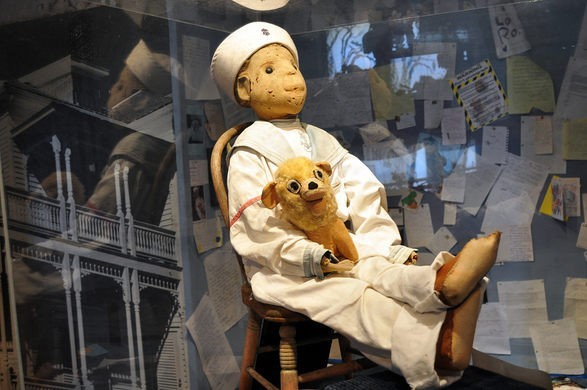 Yet another cursed and creepy doll.

Given to a boy named Robert for his 4th birthday in 1896 was this doll who Robert named Robert.

The Otto Family from Florida soon became worried and concerned about the doll when they started seeing there son talking to it in the pitch black and hearing strange laughter and even a deep dark voice coming from the doll itself.

Objects started mysteriously getting smashed or went missing all together, so they hid the doll away on the attic.

They would often hear his deep voice coming from the attic as well as things moving across the attic floor.

Robert remained up in the attic for many years until in 1976 the doll was discovered from a new family.

The person who found the creepy doll apparently fainted with fright when Robert spoke to her, saying his was going to kill.

It’s no surprise that the doll didn’t remain in the house. Instead he was donated to the Fort East Martello museum in Florida where he is kept behind a glass cabinet.

There is a sign warning people to ask Roberts permission before taking his photo and those that don’t return to the museum asking Robert to his forgiveness and if he would kindly un curse them.

As I didn’t take this photo myself I think i’ll be ok, but watch this space! 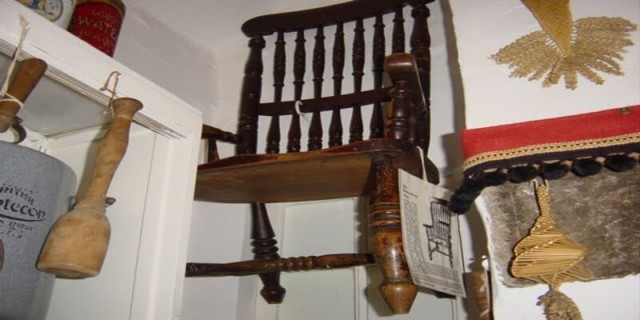 We all have our favourite chair to put our feet and Thomas Busby was no exception.

He loved his chair so much that in 1702 he cursed it, and anyone who sat in his chair would come to there death.

This was right before his execution by hanging for killing his own father in law for sitting in his chair.

Since the curse the chair has claimed the lives of 63 people.

The chair can be found now at the Thirsk museum located in Yorkshire - England, which itself is haunted, if you do go and visit the museum and see a ghost you might want a place to sit down but it won’t be in Busby’s chair as the museum has suspended it up high to stop any death by chair claims. 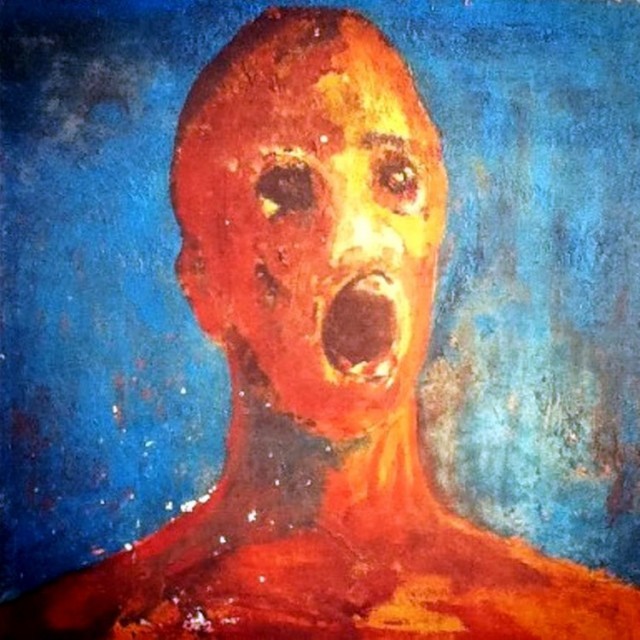 In most of our grandparents homes there will be picture hangings on the walls of a pretty vase of flowers or a nice bowl of fruit but for Sean Robinson from England he found this really creepy painting on the Anguished man down in his grandmother's basement.

From the first time he laid eyes on it as a young boy Sean has been totally mesmerised by the painting and when his grandmother passed on she left the painting to Sean.

Sean turned detective on the painting and he discovered that it wasn’t just paint on the canvas.

The artist who was suicidal whilst painting the Anguished man mixed his own blood within the paint and then then when the painting was final he killed himself and it’s thought that it’s his sad soul that haunts the painting. 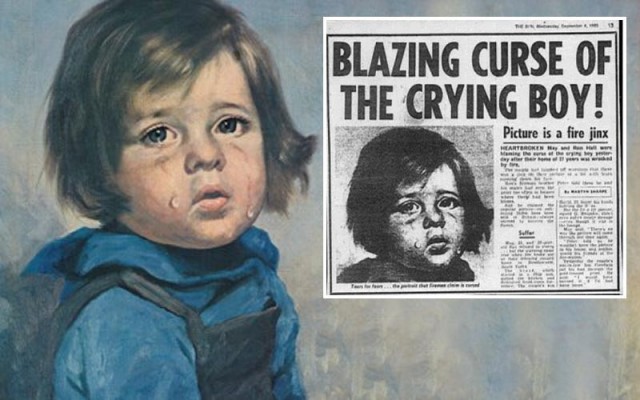 If you own one of the many prints of the the Crying Boy I would seriously think of getting rid of it.

The very first painting of this was painted by the Italian artist Giovanni Bragolin back in the 1950’s and it was so sort after that many copies were made of the Crying boy and was hung throughout many homes.

Then in 1985 an English fireman went to a local newspaper and aired his concerns of the painting.

It turns out that the fireman had attended a many house fires over the years and many of these homes had this picture hanging on the wall, but the strange thing is that the picture remained unharmed and remained in perfect condition but everything around it was burnt to ashes.

After some research it was discovered that the Crying Boy in the picture was that of a boy who was orphaned when his own home was burnt down.

The Woman From Lemb Statue.

It was first owned by a Lord however he didn’t get to own it for long as he and soon died along with the rest of his 6 other family members, all these deaths were under mysterious circumstances.

Every family there after who owned the statue all perished under unknown circumstances.

The cure didn’t stop here though. The staff member who physically placed the statue out of harm's way and locked it behind a glass cabinet died under mysterious circumstances not long after. 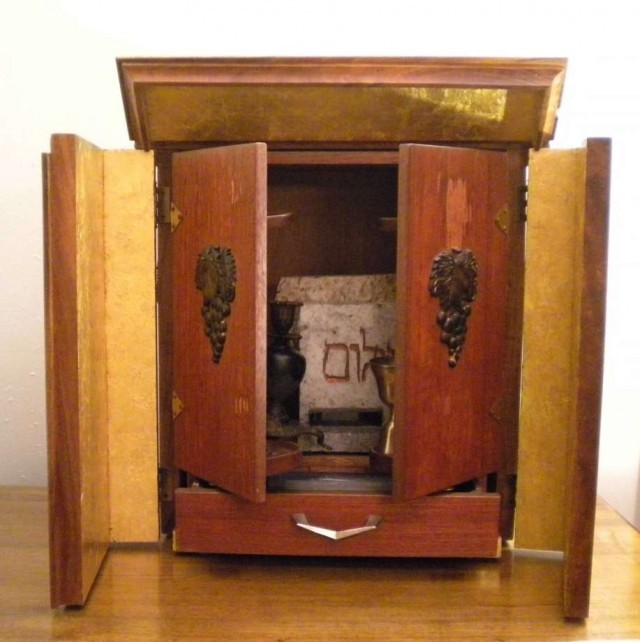 Dybbuk is jewish for evil spirit

This creepy looking box begs you to open it.

It apparently has a way of getting into your head and tells you to open it and if you come across this box ignore it.

The story has it that a jewish survivor of the Holocaust trapped a demon that had come through her Ouija board.

The box was sold 2001 to a Kevin Mannis and immediately he started having terrifying nightmare of an evil old witch, so he passed the box onto his mother and the very same day she had a stroke and died.

The box then fell into the hands of Jason Haxton who worked as the Director at the museum of Osteopathic Medicine.

Again the nightmares of the evil witch began and haunted him and as time went on he started coughing up blood and he contracted a freaky skin disease but knowing about the previous owners nightmares he went to his Rabbis who summoned the Dybbuk back into the box.

The Rabbis put the box into hiding and never told a soul where he put it.

So if you hear a box asking you to open it at the local second hall store, walk away!

No one really knows how old the Basano is but it was roughly made in the 15th century in Italy.

After it was made it went out of circulation and wasn’t seen again until 1988 when it was un earthed from the ground...seems like someone went out there way to get rid of it.

Despite the hidden note within the vase that note read “beware this vase brings death” It went to auction and was sold to pharmacist.

Then the vase bought by a young successful surgeon and again he was also found just a short time after.

The vase was passed on two more times and both the owners unexpectedly died within a very short time of owing it.

The Italian police seeing a pattern appear ceased the Basano Vase, placed in a thick lead box and it’s location is a top secret. 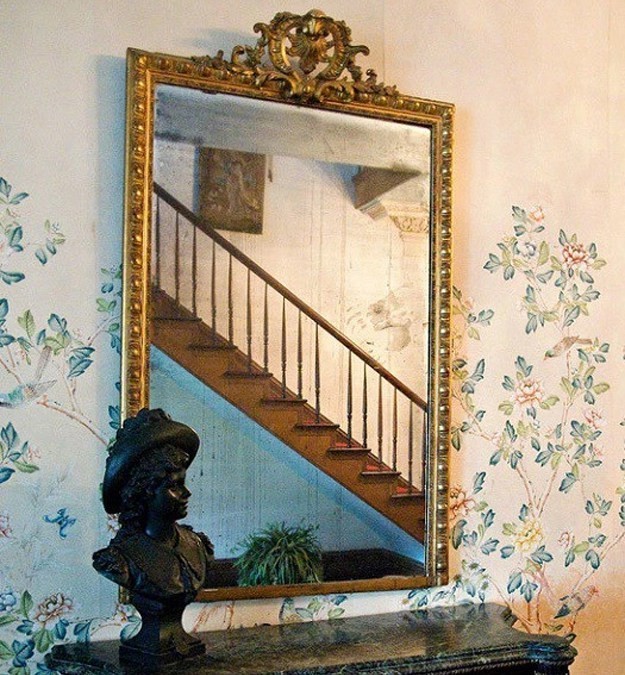 In the Deep south Louisiana is one of America's most haunted houses.

Myrtles plantation is a well known hotspot for ghost investigation teams from all over the world.

Sarah Woodruff along with her two children apparently live within the mirror itself and are often seen staring back at you.

It is believed that if the mirrors are not covered over when a death occurs there soul will remain between the world's, a mirror portal.