After more for your money when out for a bite to eat..try one of these haunted establishments.

For the Italian foodies you have to come to Spaghetti Warehouse. Not only is this restaurant home to many resident ghosts but it’s one of the most haunted places in the whole of America..so even if you're not a foodie, this place is definitely worth a visit.

This now a bustling Italian restaurant was once a pharmacy back in very early 1900’s. Sadly the pharmacist who was working there fell by accident to his death down the elevator shaft..  Or did he fall? There are also other mystery deaths that have been reported..again, by “falling” down the shaft of the elevator. Of course no one can be certain of who or what spooks this restaurant but there are many weird happenings going on here, and many visitors on an evening out have taken photos which show orbs and unexplained lights and shadows.

Reports of a lady ghost..apparently the widow of the pharmacist, who died a year later from a broken heart is very known here.. She is a very cheeky soul...she likes to tie people's shoelaces and help with the the arrangement of the furnishings but watch out as she also likes to pull hair.. And if you get a tap on the shoulder and no one is there..it was her!

If you're a man keep your eyes peeled in the bathroom..a male spirit is seen in here, he leisurely strolls up and down. The restaurant is often often filled with the laughter and voices of children, even when it’s empty.

Now onto this really REALLY ghostly restaurant.. The Catfish Plantation is an absolute must place to visit. Not only will you be dining on the best catfish platters that Texas has to offer but you’ll be more than entertained with the very friendly and flirty ghosts!

This very old building has been resident to the “others” for many years. Over the centuries this building has accumulated some very helpful and happy souls.

This restaurant has been home to a few owners over the years and ALL have experienced paranormal activity and unexplained going on. But all the ghostly activity have been very warm and welcoming. On the arrival of one of the new owners, they were greeted one morning with the “tea” making utensils nicely placed in the centre of the room..but another spirit was a cheeky one, and locked the owner out his own front door!.. There have been many more goings on with the owners, but it’s more fun as a customer. So imagine this, you sit down at your table and you get a nice gentle squeeze on the knee, and a slow stroke up the leg..that’s what one of the friendly ghosts is renowned for..but she doesn’t stop there, she’s obviously good with her hands, and shows off her talents playing gentle tunes on the piano.. Is this the same spirit that lets off the aroma of sweet but very strong smelling roses? This smell comes from nowhere and at any time. But surely this lovely lady spirit cannot be responsible for throwing silverware around the busy restaurant..can she??

But whoever this ghost is, he or she also likes to dish out the cash and throws dolla bills about the place.. Be sure to be there for that one, but maybe try and avoid the juicy lemons being thrown through the air!.

And if that wasn't enough of spooky happenings, there’s still the strong wind that blows through the restaurant when all the doors and windows are closed,and the cold spots in a very warm and welcoming environment. 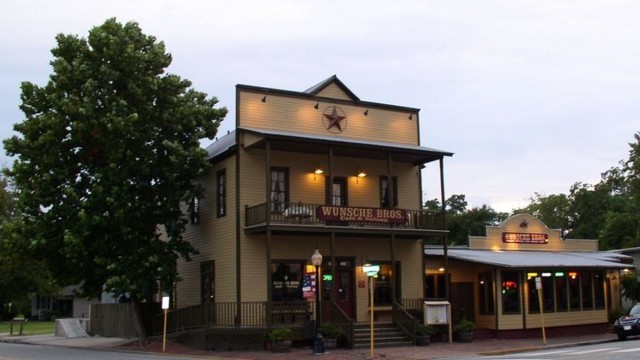 If you're after a lovely afternoon out then come to this traditional little Texas town, where you will find proper Texas music playing and lovely little boutiques and tea shops up old Oak tree lined streets of the village of Old town Spring. This is where you will find the very old and very haunted Cafe and Saloon.

Build back in 1902 by three brothers, Charlie, Dell and Willie Wunsche. It’s thought that Charlie was and still is very fond of his handy building skills and likes to look after his cafe and Saloon that serve the coldest beers in town and juicy burgers still to this day.

Charlie the ghost likes nothing more than playing tricks on the staff, he often switches on the coffee making machine and he likes to hide the nozzles off of the drinks containers.

Even if you can’t see Charlie, you know he’s there with you..many people have reported of having the sensation of someone watching them.. having goose bumps on the back of the neck,and there’s been many reports of people not been able to open the “unlocked” doors that don’t even lock. Clearly Charlie is a fun loving spirit.

Charlie has made himself seen, tho not very often..but his shadowy apparition has been seen walking the corridors of the Wunsche Bros building, and a waitress who worked here back in the 80’s has reported of serving a gentleman a cup of coffee, only to turn around for a second and he was gone..just vanished! Charlie is a good soul and makes it his “living” duty to not only watch over his beloved building but also “his” staff. Apparently one late evening, as one of the waitresses was walking to her car after her shift had finished. It was very dark out and no one else was about..she reports that she felt very uneasy that night, as she was nearing her car she had the urge to turn back and look at the old building, to which she saw a dark figure of a man looking at her from a window of the Cafe..presumably this was Charlie, making sure she was ok.