One of the nation’s largest parks, and one of Hollywood's most haunted places. 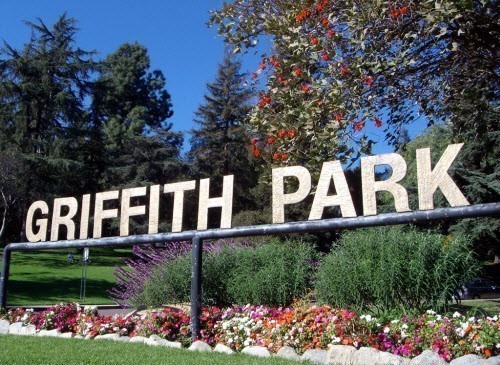 With many trails to explore,caves to discover and rocks to climb over the 4,3000 acres of land, and with a zoo and botanical gardens, the observatory, the Greek theater, Autry national center, travel town museum, sunset ranch Hollywood, Griffith pony rides, spokes n stuff bike hire and the famous Hollywood sign, and not to mention Griffith’s ghosts AND a curse, there’s fun for all the family to be had here with plenty of room for all to explore. 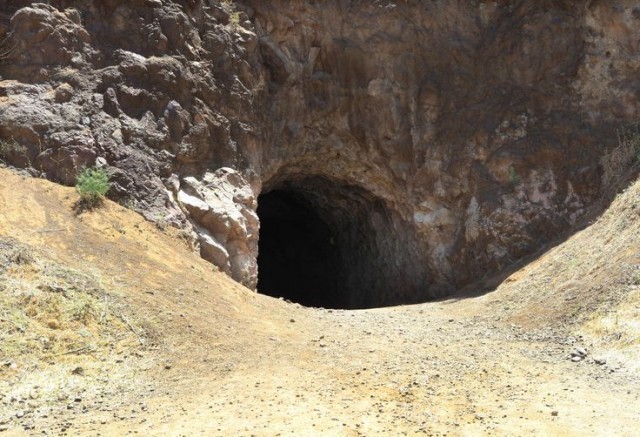 Brief history of the cursed park.

This huge piece of land was once called Rancho Los Feliz, which was owned by the Felinez.

Don Antonio Feliz lived on the land along with his sister Soledad and her 17 year old daughter Dona, who apparently was blind.

In 1863 Don contracted smallpox, which let to is death, but on his deathbed he was visited by Don Antonio Coronel and his lawyer, also named Don. The two Dons, one of which was fragile and not really with it, drew up a new will for Feliz. Rancho Los Feliz would be left to Coronel and NOT the sister or his niece.

Infuriated with receiving nothing, Feliz’s niece Dona put a curse down on the Coronel, the lawyer and anyone else who was involved, she even cursed the land itself. She then, to seal the deal for eternity, killed herself, and the Griffith Park curse began. 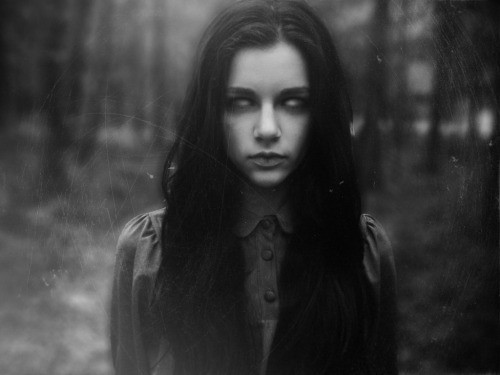 Soon after this, Coronel was shot dead and his family also died from diseases and misfortune, and the judge’s life was also cut short. Coronel’s young wife who did not die, remarried a C.V Howard, things didn’t work out and the couple were soon divorced, the land was split but Howard sold his part for a hefty profit, while out celebrating his new found fortune he was shot down dead.The land then passed over to Leon “Lucky” Baldwin who set up a ranch and dairy farm. Leon soon became “Bad luck” Baldwin, his cattle all died from disease and, grasshoppers ate away all his crops and fires destroyed whatever else was left. He became bankrupt and had to sell the land to pay his debts, Baldwins bad luck soon came to an end when he to was shot down dead.

Thomas Bell was the next landowner, a financier from San Francisco but he didn’t own the land long enough for the curse to take effect. He sold the land on to a 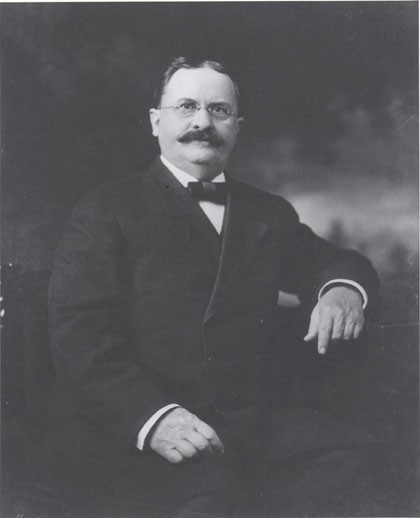 The curse lay quiet for a while, and Griffith allowed “Frank Burkett” to open an ostrich farm on his land. The curse struck with a vengeance. Huge lightning bolts came from the sky, striking many of the oak trees. The ranch workers claim that during the storm they saw the ghost of Don Feliz within the rain.

Once the spirit of Don came, that was it, he never left Griffith park and continued to haunt the land and was mostly seen near “Bee Rock” area. 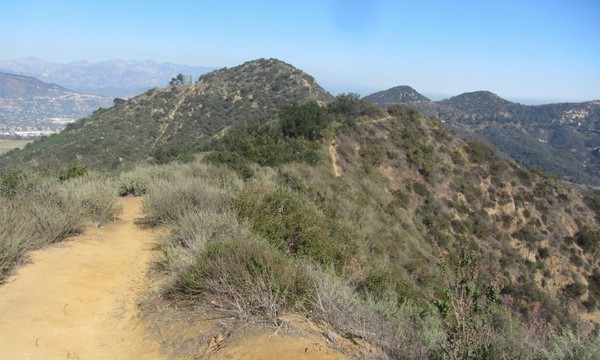 Griffith was petrified and never went to his land apart from on brief occasion and never past midday.

To try and save himself from the curse, and to get rid of the ghost, Griffith donated 3.015 acres of the land to the city of Los Angeles in 1896.

His plan didn’t quite work out for him and the curse slowly ate away at his paranoia.

He was convinced that his catholic wife and the pope wanted to steal his fortune and were plotting to poison him. At mealtimes he would swap his wife’s plate with his own. His paranoia finally got the better of him and he shot his wife while they stayed at the Arcadia Hotel in Santa Monica, but he failed, and she survived.

He was sentenced to 2 years for attempted murder and spent the time at San Quentin.

Once we was released nobody wanted anything more to do with Griffith and all his efforts at adding to the park were floored, however he did before hand set up a trust fund to have the Observatory and the Greek Theater built after his death in 1919 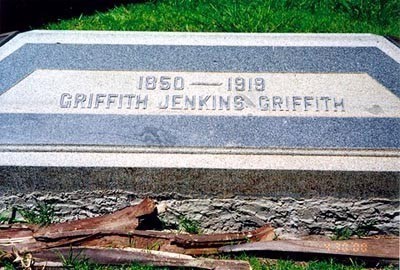 The Lovers Picnic Table, was the last reported act of the curse which happened in 1976.

Two people in love who were childhood sweethearts. 22 year old Rand Garrett an up and coming musician and his 20 year old girlfriend Nancy Jeanson, who was fulfilling  her dream of becoming an actress, were having a romantic afternoon on the picnic table when out of no where a tree fell upon them and crushing them to there deaths. 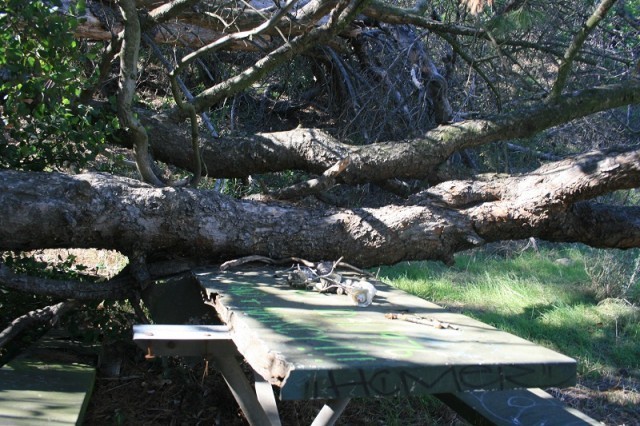 Griffith park has had it’s fair share of deaths, from tragic accidents (or caused by the curse) to suicides and the murdered souls whose bodies have been dumped and discarded, some of the bodies, or should i say their bones, have only recently been discovered by walkers.

A couple using one of the park’s many trails stumbled across a human skull, it’s thought to be of a young woman in her 20, and could've been laid here undiscovered for as longs as 10 years. But this wasn’t the only skull discovered. In 2010 another skull was discovered, and had been there for around 2 years, no other remains have found. 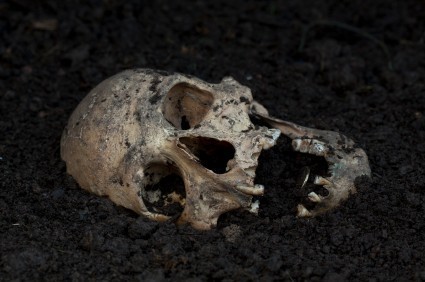 Back in 2012 another pair of hikers stumbled across a severed head that was laying under the Hollywood sign, the police soon found more body parts of a hand and foot buried in a shallow grave, the other hand was found a day later, but no other parts of the body have been discovered YET.

Another dead body of a male was found in the park, this time his body was intact, and is thought to be a suicide of a 26 year old sex offender.

The list just goes on of these gruesome findings, and with the park’s vast trails and rocks and caves, no doubt there are other lost souls buried within these creepy grounds. 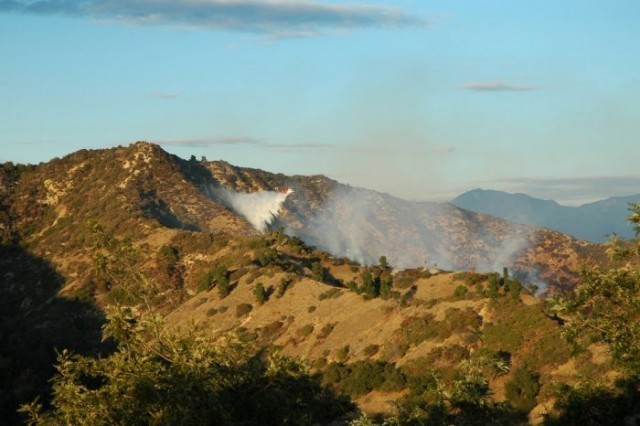 Ok, so we’ll start from where it and with whom it began. Don Feliz and the curse.

The first sighting of the ghost of Don was when the huge storm struck the oak trees and his spirit was seen riding the rain waves.

Then he decided to gatecrash a party that was being held by the in the park by some high flying,influential people. His ghostly apparition popped up on top of the banquet table, and then rode at the guests on his ghostly horse. That’s one way to stop a party.

Don’s spirit is to this day reported to be seen riding his horse through the park and is often seen and heard laughing as he stands on top of the rocks looking down at people. 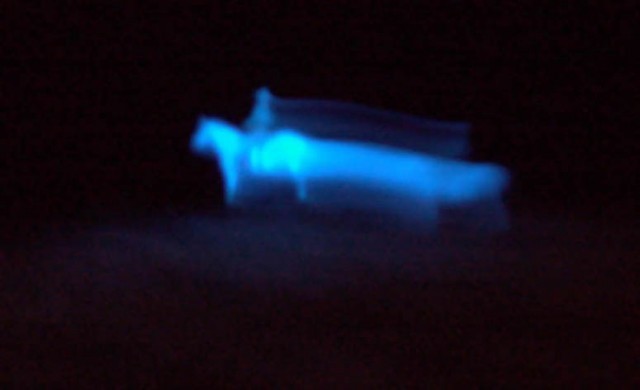 The niece of Don and the one who laid the curse.

The ghost of Dona is seen to roam all over the park wearing a flowing white dress, and the staff often see her in the headquarters. She also likes to ride her horse around the park, but she is mainly seen to take him for a gallop at midnight. 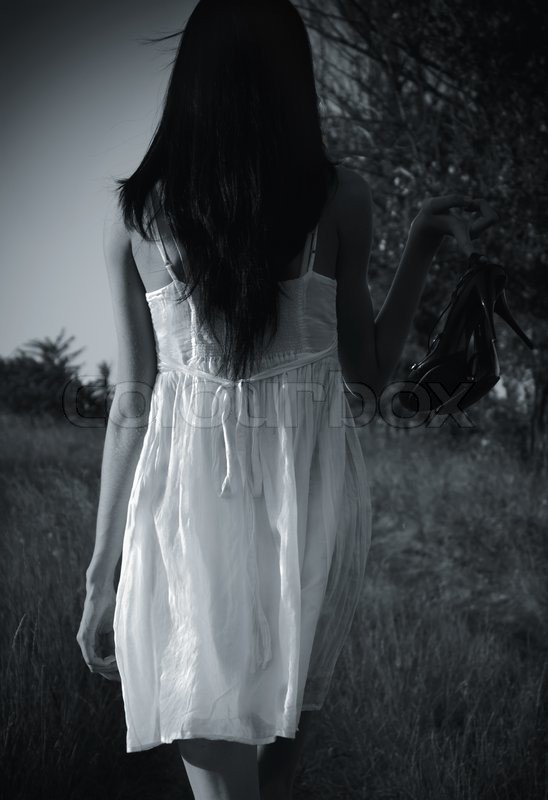 Seems he couldn’t get away from the curse after all.

Another ghost, thought to be Griffith Griffith is another horse lover it seems.

There many report of his ghost riding through the park also. 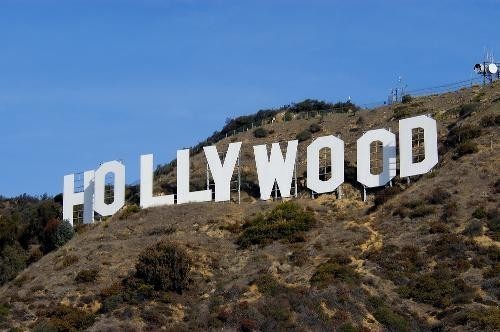 This word famous wording doesn’t need no introduction, but who would of that a bunch of letters could be haunted.

Well it is just that.

In 1932 a young British born actress “Peg Entwistle” calm and collectively, climbed the 50 foot “H” neatly placed her coat and bag and then plunged herself from “Hollywood”

Peg never left Hollywood, even after her body was found the next day and removed.

Her spirit is often seen aimlessly wandering the area of Hollywood in Griffith park. 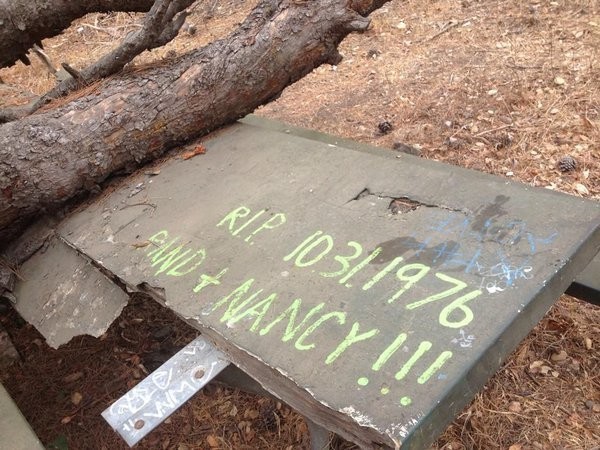 Since the tragic deaths of Rand and Nancy, there have been some real weird and creepy happenings going on around the picnic table and fallen tree that killed them.

After the accident one of the park rangers was given the task to chop and remove the fallen tree, but things didn’t go to plan as they should have..

It’s reported that the minute he started to do his assigned task he got the weirdest feeling, he came over all peculiar and suddenly felt chilled to the bone. He continued with chopping the tree into smaller pieces and all of a sudden the tree started to violently shake, and then the cries and screams surrounded him. He then heard whispers in his ear and someone telling him to “Leave us alone”. The ranger didn’t hang about and jumped in his truck to get away but the engine wouldn’t start, the ranger had a lucky escape, the engine soon started and he was off. 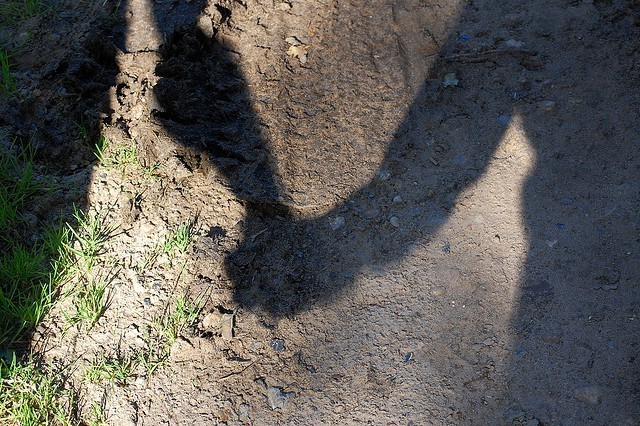 The tree remained there as it was for a month or so,until Denis Higgs the supervisor went  to do the job himself. He was found the next morning by the tree dead. The chainsaw of the blade had somehow been bent into a “U” shape. The conclusion was that Higgs died from a heart attack but many beg to differ. Apparently his hair had turned white and his facial expression was that of someone petrified.

After authorities concluded their investigation, it’s reported that Higgs’s body was dragged across the ground and with the state of his hands and fingernails, it looked as if he was attacked.

Still to this day people report of an eerie feeling here and others have claimed to hear someone telling them to leave them alone. 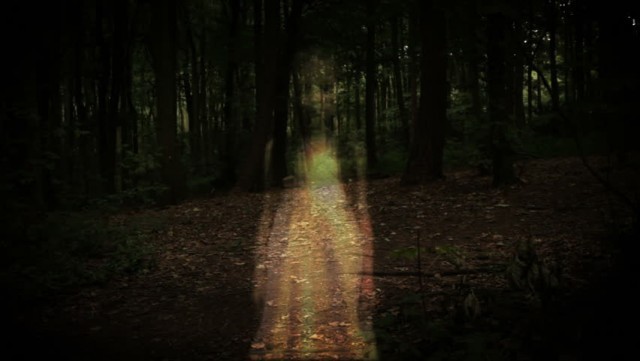 There is no name to the little girl ghost who is frequently seen frantically running around the park, and asking people for help

But it is thought that this little lost ghost is of a girl who got in the park and died. 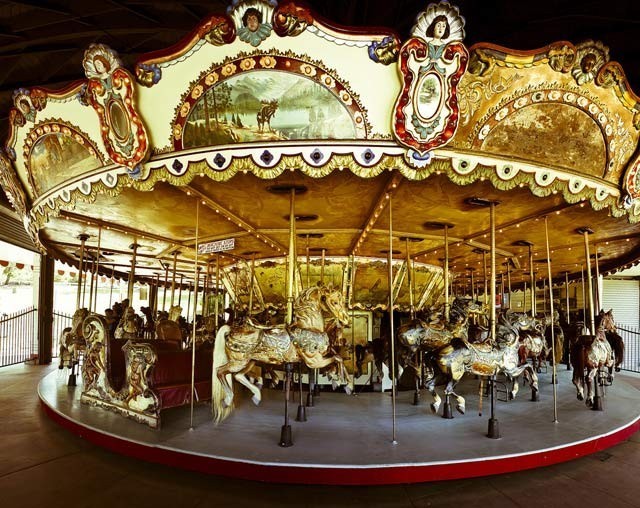 An unknown spirit is report to be seen at the merry go very often, and he’s seen to walk up and the down the steps of the nearby buildings.

His apparition is seen so much that many ghost investigation teams have been called in to see what they can find out, including the team at “Ghost Adventures”.

I wouldn’t be at all surprised  if a few more unknown ghosts soon pop up in Griffith park, so watch this space!