This is one of America's top haunted buildings,but is it the most spookiest. The Eastern State Penitentiary Prison.

Eastern State Penitentiary is reported to be that haunted that many paranormal investigation teams “Ghost Adventures” to name but one, have been here to see for themselves and to try and capture these ghosts. 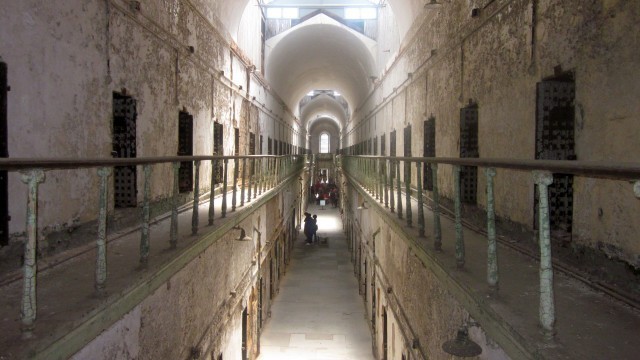 This is not just classed as a haunted prison, Eastern State Penitentiary prison is also classed as one of America's top haunted buildings!

This prison really is one of the most spookiest buildings I have looked and the factual stories of what went on behind these walls will make your stomach turn.

It’s easy to see why this place is haunted, with 142 years of torture and terror being carried out on the inmates behind these haunting walls.

Death's here range from execution, torture, disease, suicide, murder and old age. Some say that death for these souls was the easy way out as if you were a prisoner here solitary confinement was how all the inmates lived, as it was believed it helped reform the them. 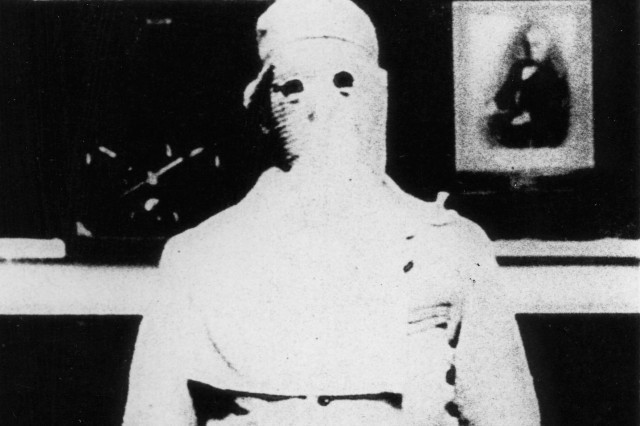 Inmates were “bagged” whenever they left their cell as to not have any face to contact with the other prisoners.

Even in the exercise yard, where the inmates were allowed 1 hour a day of fresh air and daylight, there timings were adjusted so no cell neighbours were out at the same time.

As talking was forbidden, if you were heard trying to communicate then the Iron Gag was used as a punishment. 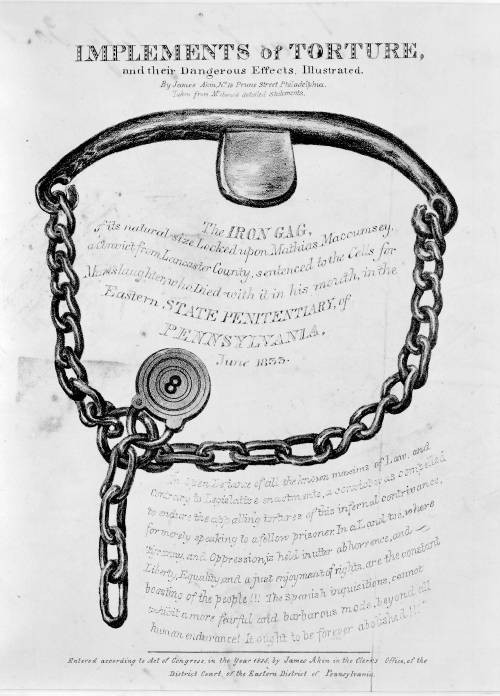 The Iron gag was one the of the most feared torture devices. The gag would be placed in the mouth with the the tongue chained to the prisoner's arms and wrists which were strapped behind his back,any movement would result in the slashing of the tongue. Many inmates came to die this way as they were left to bleed to there deaths.

If they were lucky enough to survive this but still didn’t abide the non communication rue or any other rule then one of these other torture devices would of been used to teach them a lesson. 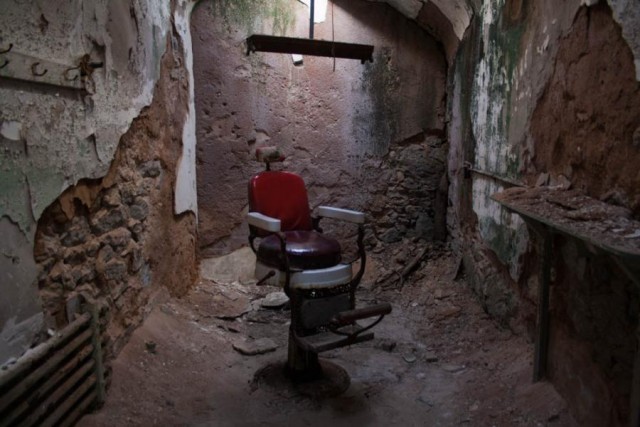 Often prisoners would be strapped in this chair to tightly they were unable to move at all. They would of be left just to sit here for days on end with no food or water, and in their feces and urine.

They only got release when the guards decided that there circulation in there body was about to stop and they were on the verge of death. The mad chair is named that as many did just that. They would go mad and was never the same again.

Here you’ll see Zak from Ghost Adventures catch an EVP telling him to get out while he’s strapped in the mad chair. 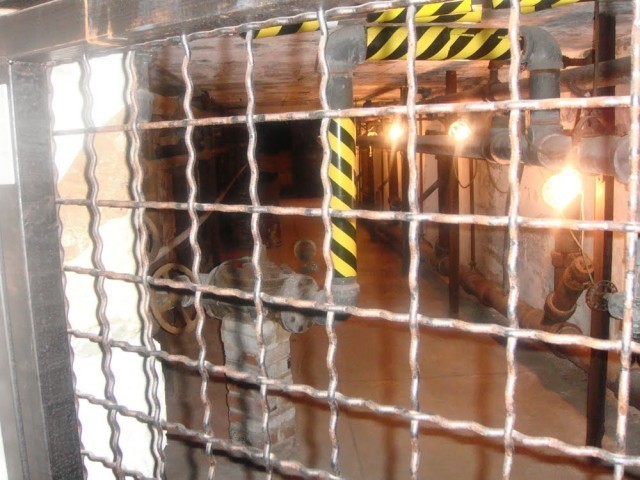 This is exactly what it’s called. The Hole is a very small and dark pit in the ground purposely built or “dug” under cellblock #14. With no window for light or no air circulating, the inmates were left here to rot for days, even weeks on end with just a slice of bread and cup of water to keep them alive and rats for company. 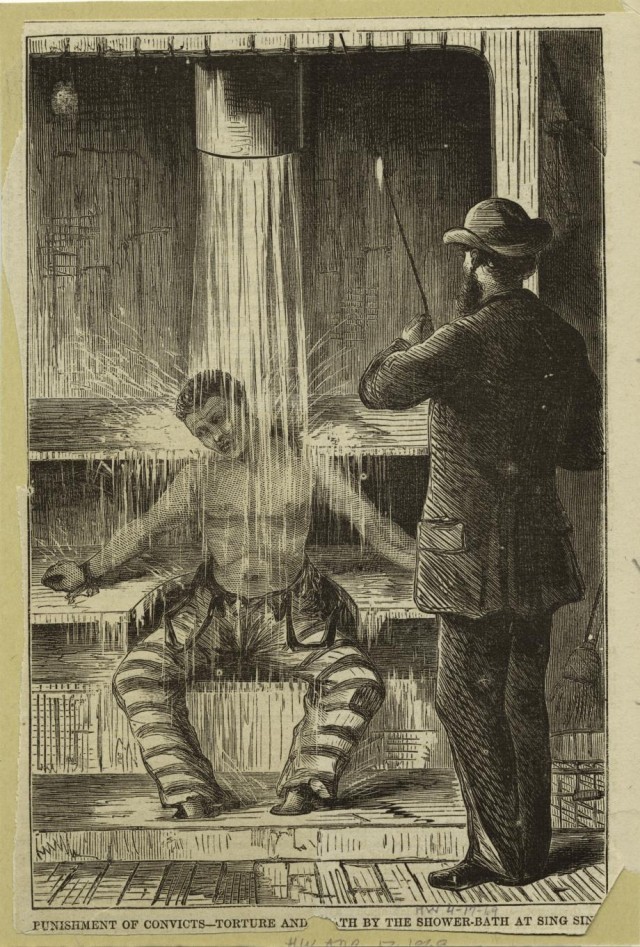 Another form of torture that was popular at the ESP was the water bath. This isn’t just any normal bath with hot water and bubbles.

This form of torture was most popular in the winter cold months. The unruly inmate would be chained down and drowned with ice cold water and then hung out and chained to the walls outside in freezing temperatures where the water would turn into ice all over the body, he would be left here until the morning. 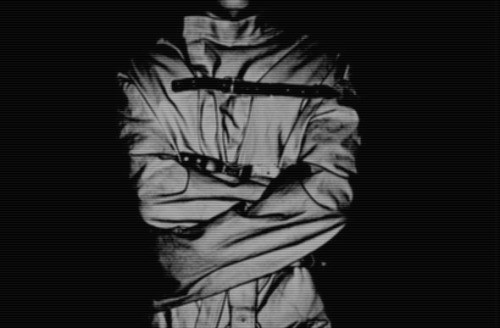 Used not for the safety of the inmates as it is in our times. The straight jacket, even tho it was intended for use to stop someone from harming themselves and others, was used at the prison as a means of punishment. It was strapped around so tightly that the inmate would have all the air squeezed out of him would pass out.

Life at the Eastern State Penitentiary was a brutal and horrific one, and it wasn’t only the torture devises that was torture. Just “living” as an inmate was torture enough. Even the best behaved prisoners lived their whole time behind bars, or in this case wood in solitary confinement. 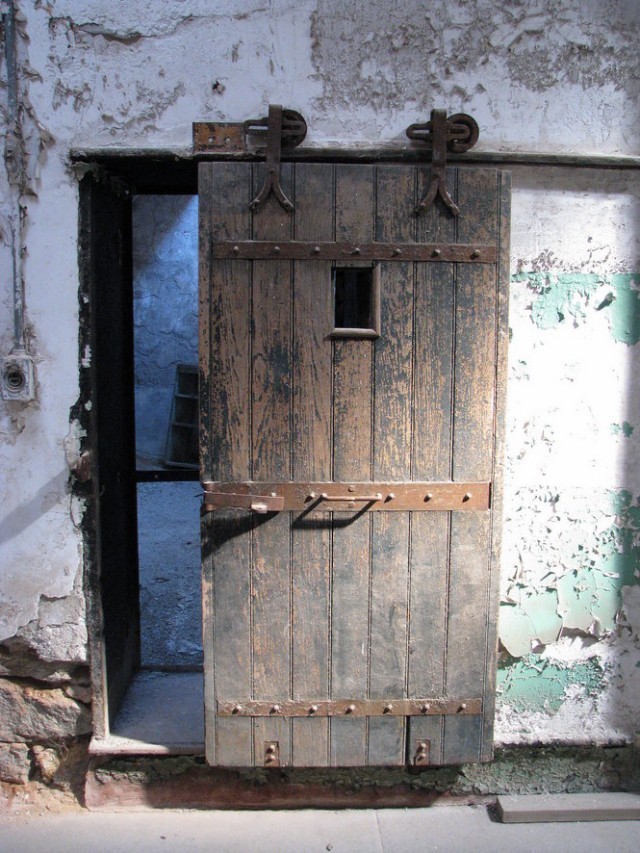 Inmates would have just a hard metal framed bed, a blanket, toilet and small desk in there small cell as well as “the eye of god” watching them. The eye of god is a small window which looks down on them in the cell. 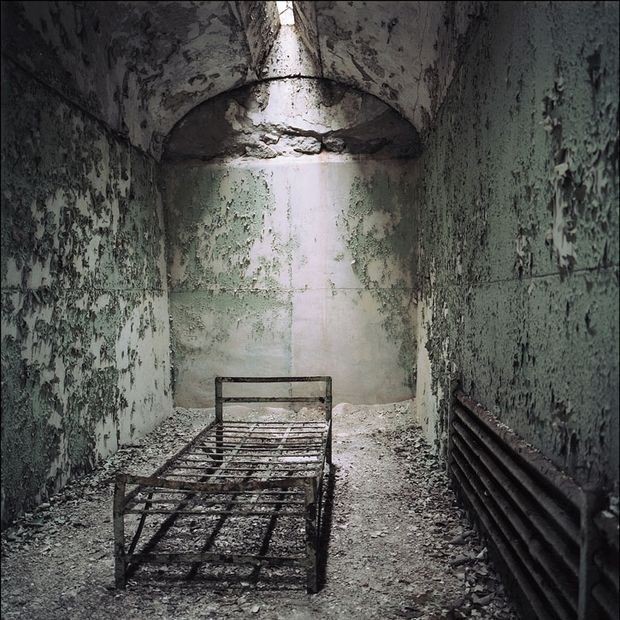 The eye of god” a prisoner's cell.

So with so many torturing that took place here I would be surprised if this prison didn't home a few of these lost souls.

Reports of hauntings date way before even before the prison was closed down in 1971.

Al Capone aka “Scarface” was jailed here for a short spell of 8 months from 1929-30. He even reported spooky happenings. It’s said that Al Capone was being haunted and tormented by someone who he killed. A James Clark, he was killed during a valentine's day massacre along with other men.

Guards who worked at the prison along with visitors have all made claims that they have seen spooky shadows and heard unexplained noises, but since it’s closure more and more reports are being shared and new paranormal activity is happening all the time to visitors and tourists.

Some of the more reported accounts of the ghosts here are that in cell block #6. This is where you will come face to face with the vision of a dark unnerving shadow that slowly slides down the walls.

Cell block #12 is just as creepy even without the ghost appearing, Here there are reports of an evil soul that makes your hair stand up with just it’s cackle it makes at you. 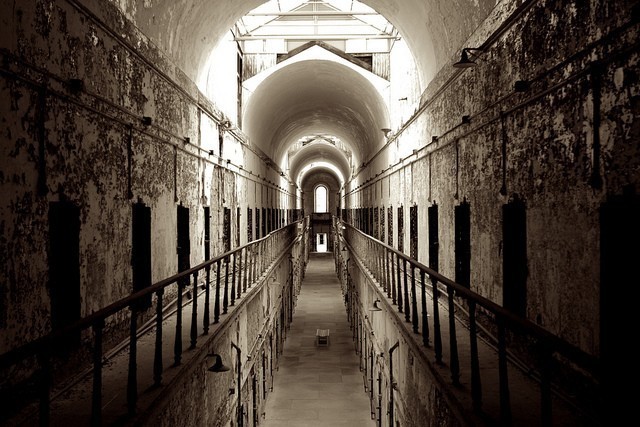 Here there have been many sighting of evil ghostly faces appearing on the walls and of loud whispers that can be heard all around you, if that wasn’t enough to scare you out of your wits then the loud  screams from the tortured souls will.

Even just swiftly walking through this place is super spooky. Most people who visit here say that they get overwhelming sensation of being watched, and just the feeling of dread.

But the most famous and spookiest of reports of ghostly activity has to be of that of a report made by a locksmith who was working here doing restoration works. He was removing 140 year old cell locks from the doors in cellblock# 4 when he claims that something or someone evil took over him and he was frozen,the unseen entity was so powerful he was unable to move or speak.

He spoke of seeing just the faces of men sliding over the wall and disembodied orbs floating around him. The locksmith still to this day has vivid nightmares about what he experienced here. Think it’s safe to say he never went back.