Voted one of Britain's most Haunted buildings.Only the brave may enter. 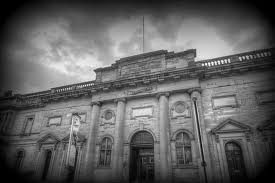 What will you find behind these doors? GHOSTS of course and many of them to.

Men, women, witches and even children were killed here by hanging while others died while being imprisoned in filthy conditions in the underground cells and pits. 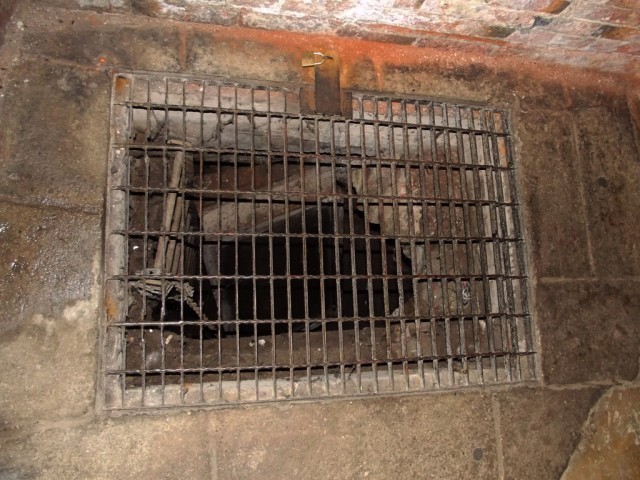 People were thrown down these dark,scary,small pits, most were left to die in there own filth and squaller.

With this building being voted one of the most haunted in Britain. The Galleries of Justice in Nottingham should be on everyone's list of places to visit, not just ghost hunters.

The fun starts the minute you set foot into this 14th century building. It started it’s life as a courtroom and the gaol from the mid 1400’s, and then soon the police station followed.

This very Spooky and very old building hasn’t just got the grand courtroom above the ground, but has it’s very own underground cells and cesspits, and it has it’s own secret “city of caves”  which leads up to (in olden times) some of the most poorest streets, no doubt where many of the criminals would hide out and many would of been brought through to the Gallery to be sentenced to death, then either hanged or left to suffer in conditions not fit for even the worst of criminals. 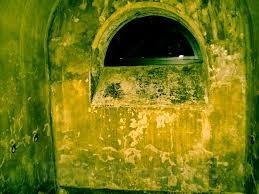 Before there hanging they would of been left in one of the cells which were that un humain that the Victorians closed the prison down in 1876. 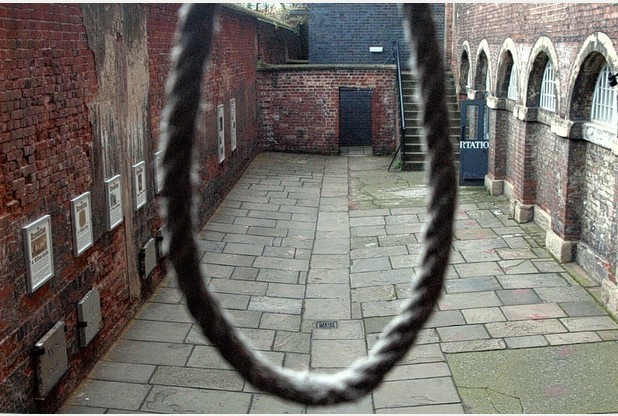 The hangings would of taken place out in the open for the whole public to witness.

Ok so on to the Ghosts!

This whole place is haunted even The Entrance Hall. This is no ordinary entrance hall, and it's that creepy that even the cleaning staff of the Gallery won't work here alone. This hall is said to be home to three ghosts and all of whom have been seen many times. The first one being a very smartly dressed Victorian man, the second a young soldier and an old lady. If there not visibly here to greet you on your arrival, they will be greeting you with a cold draft of wind instead. 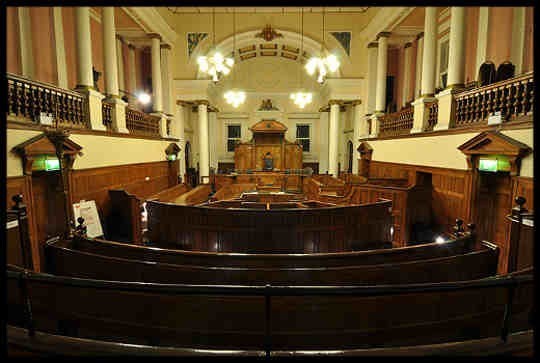 The ghosts in here will make you very aware of their presence in an instance. Either with there loud knocking on the wood for all to hear, or maybe with some loud shouting. Some of them are heard sobbing and others will appear as a dark shadow looking down from the courtroom balcony. Who are these souls that torment the courtroom? Some people say it’s the relatives of those being sentenced to death others say it’s the prisoners themselves, “living” in their sorrow.

Corridor and stairs leading to the eerie cells. 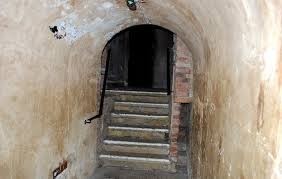 Just looking at this photo is enough to make the hairs on the back of your neck stand on end, but if doesn’t then maybe the slamming of the cell doors and then the rattle of the heavy keys will do it. And if that doesn’t do it, then maybe the heavy loud footsteps right behind you will, oh, and you're alone. 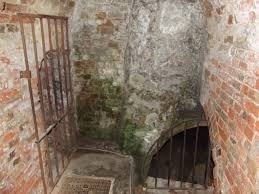 If this place doesn’t give you the creeps then nothing will.

Be warned, this is no place to go alone. The pits are very scary and very haunted. Many ghosts “live” down here and they want you to know it.

Many people visiting the Pits don’t stay down here very long, they get that frightened just by the atmosphere that they have to leave instantly. Other people have actually fainted and most get very bad bouts of nausea.The ones that do stay and brave it out might get a bit more than the sickness. The dark souls down here have been known to physically touch you and appear for you as a dark shadow as well as the footsteps that can be heard all around you.

Many people who go out into the old courtyard may not be aware that there walking over many dead bodies.They buried many prisoners under the very place they were allowed to exercise.There are many reports of strange lights and orbs being caught on camera out here, as well as having that very uneasy feeling that someone or something is there with you.

Death is carved into the brickwork in the exercise yard. 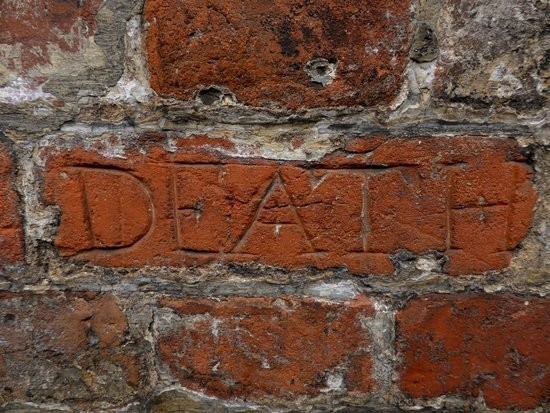 Even the laundry room is reported to be be haunted. There are many reports of the doors slamming shut in here along with a very strong unpleasant smell, lights and orbs have been captured on many people's cameras.

But by far the most haunted part of the Galleries for Justice is the Chapel and Caves. If you venture down through the “city of Caves” which runs under the Gallery be careful. There is a ghost down here in the chapel who likes to throw the sacred cross at you, and if this naughty spirit misses you with that, then you may get a stone thrown in your direction instead. Many people have reported paranormal activity down here with with many reports of being touched by something invisible.

Is this the “mist” of a ghost that haunts the Chapel and caves? Apparently so. This was caught on camera.

So if you do visit the Galleries Of Justice in Nottingham, be sure to have your wits about you and take lots of photos and video footage, you never know you might be lucky enough to capture a Gallery Ghost.