Many hotels have ghosts and some are associated with certain areas or rooms within the building.

The with Driskill Hotel haunted room 525 is the one that gets the most mentions but is by no means the only paranormal connection within the historic building. 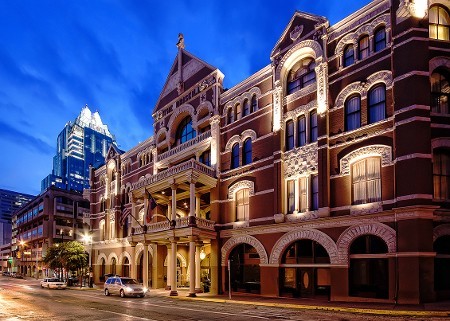 Back on December 20th 1886, Jesse Lincoln Driskill opened the ‘Hotel of Dreams’ he considered the building to be.  He had bought the space for the hotel a year earlier for just $8,000 but by the time the building work was done, he had paid out over $40,000 – a huge amount of money at the time.

Driskill was a civil war colonel with a gambling problem who had no sooner completed the building than he lost it in a high stakes poker game.  He died in the hotel, broken and disconsolate and himself is said to be one of the resident ghosts.

The hotel continued to prosper however and soon became a popular location for politicians, celebrities and business people.  In fact, a number of these famous people are the ones who have reported sightings during their stay.

Perhaps the most well-known haunted location within the hotel is room 525.  It is known as the room of the suicide brides and has a tragic (if slightly unproven) story associated with it.  Two young women were on their honeymoon in the hotel, some twenty years apart and both killed themselves in the bathroom of Room 525.  Following the second tragedy, staff decided to shut off the room to prevent any further sadness but in 1998, the room was reopening.

Since then, people staying in the room have reported a series of weird incidents.

These include leaks in the bathroom that defy explanation as well as actual apparitions.  These include a woman in a wedding dress, not a huge surprise due to its history.

The fourth floor is another area with a suicide ghost, that of a woman who appears to people just in the corner of their eye, at the edge of their vision.  When they turn to see who is there, she vanishes.

Others have reported faint whispering in a female voice and others have heard a woman crying, only to find no-one is there.

She is said to be the spirit of a woman who killed herself on the floor during a stay.

Singer Annie Lennox, once of the Eurythmics, once stayed in the hotel and reported a strange experience.  She was unsure which of two outfits to wear for a gig that night and laid both on the bed.  She went into the shower and when she returned, one had been packed back into her case while the other remained on the bed.  She followed the ghost’s advice and wore the outfit it had chosen.

The lead singer of Concrete Blonde, Johnette Napolitano, even wrote a song about the ghosts she encountered while staying in the hotel, called Ghost of a Texas Ladies Man.  She believed the spirit was that of the original owner, Colonel Driskill.