Alcatraz Federal Penitentiary, San Francisco bay in California is one of the most haunted places in America. 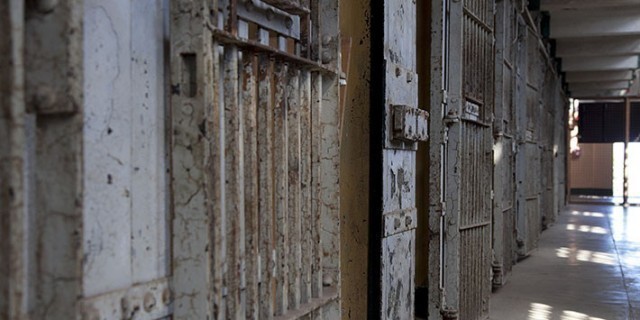 Before Alcatraz opened it’s doors as a prison for the most dangerous and notorious of criminals including mob boss Al Capone and George “Machine Gun” Kelly, to name a couple, it was Alcatraz Citadel, a military defence and functioned as a war camp in 1861, and then a long term military prison 7 years later. As the years went on Alcatraz became even more developed.

In 1893 the first hospital was opened, and then a new upper level prison was built a few years after that.

But a few years more, the Citadel stopped functioning as the military defence and a load of money was injected into reforming Alcatraz fort, thus Alcatraz Federal Penitentiary was born in 1934. 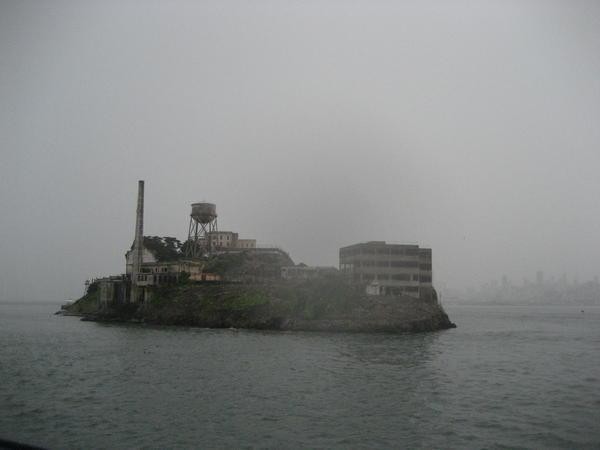 Alcatraz Island was haunted a long time before the prison.

Early explorers to the Island have described the land to be suppressed with a dark,heavy, disturbing atmosphere.

Archaeologists revealed old native artifacts and bones buried deep in the grounds, indicating that the Island, more than likely was used by the Natives American tribe “Ohlone” as a burial ground for the tribes outcasts.

Even tho the prison itself has been closed and unused since 1963, Alcatraz penitentiary and the Island it sits on, is as busy and alive as ever.

Visitors, mediums and ghost investigation teams, from all over the world, flock here to Alcatraz Island to step inside this super creepy building, just to see for themselves what lurks behind the doors. 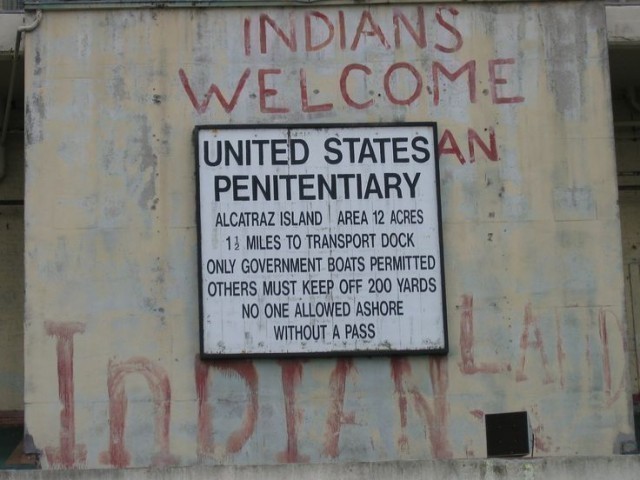 As you step off the boat onto the Island, immediately the goosebumps take hold and the hairs on the back of your neck stand on end. With so many deaths that occurred here on the Island it’s understandable that you get creeps.

Even if you didn’t die on the Island, you lost your soul to it. Alcatraz was here for one thing, to punish the bad, and that’s exactly what happened here.

That’s what the heavy unnerving feeling is when you walk about this haunted Island, it’s the dark energy of all them souls that got beaten and left in there own squalor for days in the dark dungeons, and all the murders, and deaths by illness that happened on this condemned land. 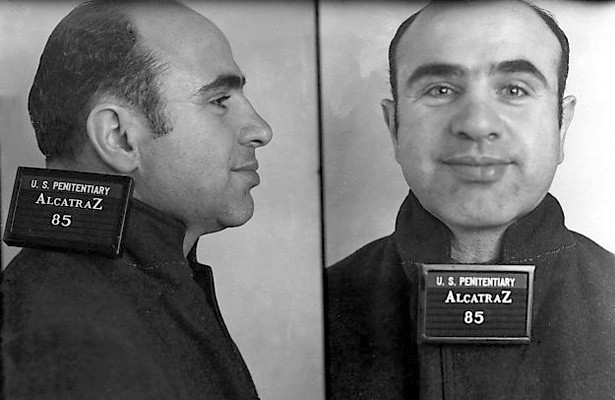 He was a force not to be messed with, the most powerful crime boss in and around Chicago with over 1000 gunmen under his name, but Al Capone was caught for his crimes and served 11 years in Alcatraz.

During his time here, he did at least 3 stretches down in the “hole” a place of utter horror and torture, even for the baddest of the bad. No privileges were allowed in the prison, talking wasn’t even permitted unless it was in allocated time, but musical instruments were.

So Al had his Banjo, and would sit in his cell 181 playing it for hours and hours.

Although Al was released, it seems as tho he left his soul behind.

Many of the rangers and visitors report of hearing Al’s twanging Banjo in the showers as they walk through and feel a cold spot as they pass, and his cell door is often seen casually swinging. One visitor reported of feeling someone touch the back of there neck and when they turned around no one was there. 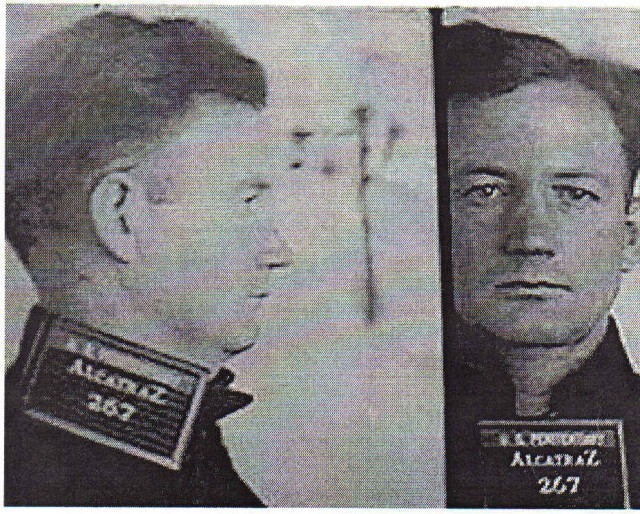 In January 1939 the 3 men tried to escape Alcatraz. The attempt did not go to plan and ended with the death of Arthur when he was shot by a guard.

Both Rufus and Henry were sentenced to almost 22 horrific months in solitary confinement, and with a constricted diet of just 2 small meals per day.

Once they were both allowed back to there “normal” cells they were allocated jobs in separate departments.

Henri Young was directly above working in the furniture section when he grabbed a spoon, ran down to where Rufus was in the tailoring section and stabbed him in the neck with the handle.

It’s reported that his old solitary confinement cell 14D is freezing cold and his presence can be felt.

McCain is also accused of murder, but couldn’t be charged as he was dead when he did the crime.

The story is that a few years after his death another inmate now occupying McCain's old cell on D block, saw a heavy dark shadow with glowing red eyes, petrified, he was left alone to scream all night, locked in his cell with no way to get away from this “evil” entity. He was found the next morning with unexplained marks all over his body, purple faced, bulging eyes and dead. He had been strangled, by an invisible entity. It’s claimed that is was Rufus McCain. 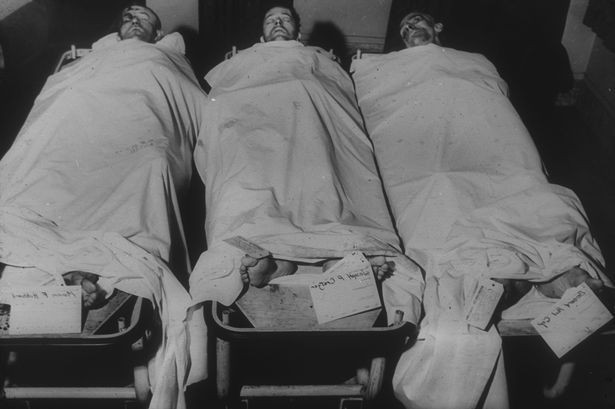 One day back in 1946, 6 inmates decided to attempt the impossible again, and escape Alcatraz.

So the Battle of Alcatraz began.

The 6 men which included Bernard Coy, Marvin Hubbard, Joe Cretzer, Clarence Carnes, Sam Shockley and Miran Thompson, managed to overpower the guards and take possession of their keys and weapons. It was just after lunch so most of the inmates were at their allocated industries so the cell block was pretty much empty.

What the men didn’t account for was that out of all the the keys they had stolen, not one of them was going to open the door to the outside world.

Now with nowhere to go, trapped in the utility corridor near cell block C, 3 of the men (Clarence, Sam and Miran) gave up but Bernard, Marvin and Joe did not.

Joe took the revolver he had stolen and started shooting.

The marines were called in, but the standoff lasted a bloody 2 days, which resorted in the death of the 3 men and 2 guards, and left 17 others with bad injuries.

The ghosts that go with this story, is that bangs and unexplained noises can be heard from behind the door, when opened the noises stop, once closed again the noises start up again.

Ghosts reports from Inmates and Guards.

Many, if not all the inmates were completely mad by the time they left Alcatraz, but what made them go loony?

Apart from the poor conditions and bad punishment they had to put up with, it’s reported that many of the inmates themselves were tormented by the ghosts.

Many of the inmates reported to the guards time after time of hearing whispers throughout the night right up close to them as well as all around them, and others would see blue floating lights shimmering up the corridor. 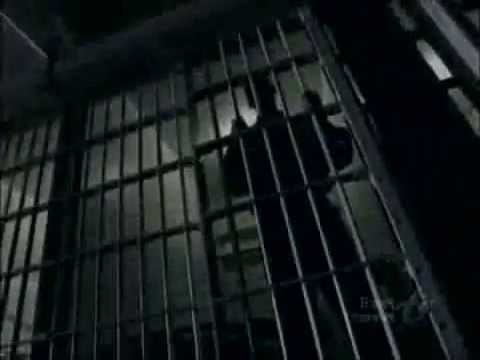 Other reports made from the inmates are of seeing ghostly apparitions floating the corridors along with muffled talking and clanging of keys and slamming of already shut doors.

It wasn’t just the inmates who got visited by these ghosts. Many, if not all of the guards at some point had at least one creepy experience.

Lots of the reports are of hearing the loud sobs from a lady, and experiencing sudden cold spots.

One guard saw a group of Native Americans marching in circles, and then suddenly disappeared right before his eyes.

There are even reports of seeing the ghosts of old 19th century military prisoners in A-block, when approached they simply vanish into thin air.

Along with seeing these ghosts there are some who remain unseen, but they make themselves known by letting off phantom canons and shooting there dead guns.

Ghosts reports by Visitors and staff.

Since the closure of the prison in 1963 people have had the opportunity to come to Alcatraz to experience these ghosts for themselves.

And year after year more of us come. It’s seems as tho us living peeps can’t get enough of the ghosts of Alcatraz.

Now empty the ghosts here have full run of the prison and have really let their hair down.

Paranormal activity had heightened over the years and with no evidence of these ghosts moving on anywhere soon.

There’s so many reports of footsteps and eerie moaning noises and men talking that are heard in cell blocks A and B. Former inmate Abie “butcher” Maldowitz is reported to haunt cell block C. A physic described him as a very disruptive presence.

One of the watchmen swore she heard loud screams coming from the dungeons below in cell block A, thinking it may be a tourist in trouble she ran down there, She found absolutely nothing apart a very cold dark space.

Other watchmen report of hearing men walking all around them, but clearly there is no one there.

Tourists take many photos when visiting here and some have even captured there very own Alcatraz ghost.

Below is the most famous of the pictures, captured by an English couple.

It shows a lady from the 1940’s era..maybe she is one of the wives of guards who used to live in the family quarters? 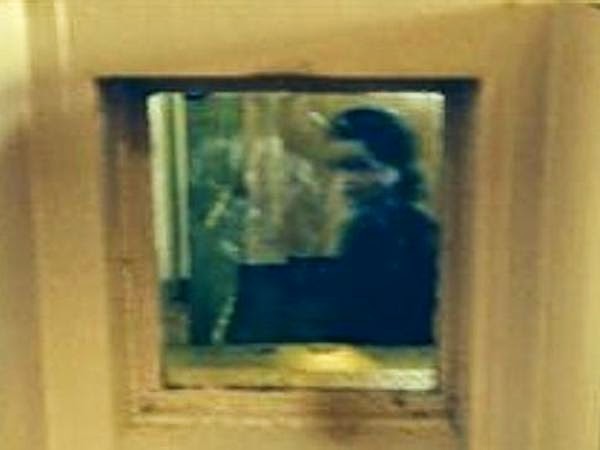